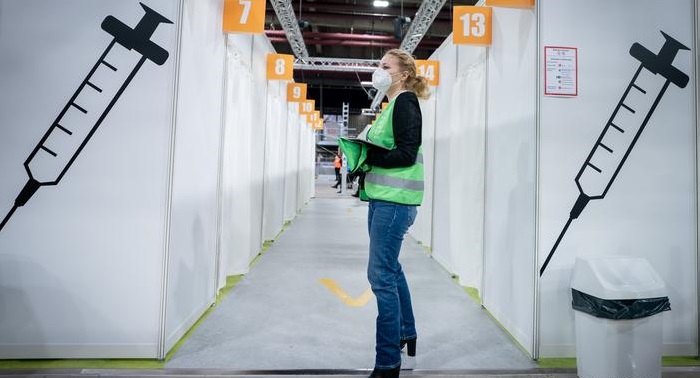 The German government has warned of suspected attempts to disrupt the coronavirus vaccination campaign by foreign intelligence groups as well as conspiracy theorists, according to a media report.

"Several suspected attempts to spy on German vaccine manufacturers have already become known," newspapers of the Funke media group quoted the Interior Ministry as saying. The statement was in response to a Green party inquiry.

The ministry added that the danger of cyberattacks was "classified as high."

The report said facilities for research, production, and approval of vaccines are considered potential targets for espionage and sabotage by foreign intelligence services.

The ministry also warned of possible disruptive action by conspiracy ideologues. Former TV chef turned conspiracy theorist Attila Hildmann, for instance, wrote on his Telegram channel: "the syringes in vaccination centers resemble the bombs of the Dresden bombing," and told his followers that protests are pointless and that they must instead take targeted action "against injustice."

Green party politician Irene Mihalic said the recent storming of the US Capitol in Washington showed "how quickly absurd conspiracy narratives can turn into violence."


AstraZeneca's planned reduction in COVID-19 vaccine deliveries to the European Union has sparked anger and frustration across the bloc.

Peter Liese, a German MEP, and coordinator of the European Parliament's Committee on Public Health told DW the pharmaceutical firm's actions go against its contract with the bloc.

"I'm really angry with this company. I think the last word is not yet spoken," he said, noting that the UK's vaccine supply will continue as planned but that deliveries to the bloc are expected to be curbed by 60%.

"This is completely unacceptable. We have a contract. The European Commission has a contract and they should fulfill [it].

Liese, who is also a medical doctor, said that he believes the company will likely change course. "I expect a change of the planning in the next hours, over the weekend, and we will get the vaccine in February. We will get millions of doses. I know a lot of people are fighting for this now," he said.

European regulators are due to decide by the end of January on approving the AstraZeneca-Oxford University coronavirus vaccine.