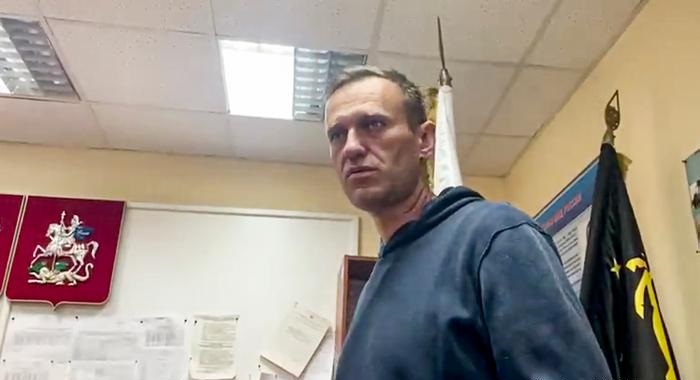 Russian opposition leader Alexei Navalny was rushed to a makeshift courtroom on Monday, just a day after his arrest at a Moscow airport. The court session was set up at the police station in Khimki, on the outskirts of the Russian capital.

Navalny's aide accused authorities of denying him access to his lawyers, saying he was notified at the last minute of the makeshift hearing.

The judge handed Navalny a sentence of 30 days in prison.

"I've seen a lot of mockery of justice... but they have ripped up and thrown away" Russia's criminal code, Navalny said in a video of the proceedings that was released by his team.

"This is impossible. It's ultimate lawlessness," the 44-year-old added.

Navalny called on Russians to join him in protesting the government, in a video posted on YouTube from the police station.

"Do not be silent. Resist. Take to the streets," he said. "Don't go out for me, go out for yourself and your future," the anti-corruption activist added.

Some 200 hundred Navalny supporters gathered outside the police station to demand his release, Reuters reported.

DW's Moscow correspondent Emily Sherwin said it was noteworthy that Kremlin spokesman Dmitry Peskov had initially said he was unaware of the circumstances of the arrest.

"That's of course in keeping with the Kremlin's general policy to downplay the importance of Alexei Navalny here in Russia and on the international stage," said Sherwin. "In fact, Vladimir Putin has never actually referred to Alexei Navalny using his name. He always refers to him as 'the blogger,' and also more recently as 'the Berlin patient.'"

However, according to Vladimir Ashurkov, executive director of the Anti-Corruption Foundation and a friend of Navalny, the Kremlin feels threatened by the opposition leader's versatility.

"He can play on different chessboards, he can organize mass protests, he can build an effective organization," Ashurkov told DW. "He has gained his fame in investigations of corruption in large state-owned companies and among government officials. So he is quite versatile and he has proven that his resolve is really unrivaled."


Navalny was arrested on Sunday, as he was returning home from a months-long stay in Berlin. He was flown to Germany for treatment at the city's Charite Hospital, suffering from what the German government determined to be poisoning with a Novichok nerve agent.

Seibert said Russia had arrested the "victim" of "attempted murder with chemical weapons" and "not the perpetrator."

Merkel had "repeatedly" noted that Russia's treatment of Navalny "weighed on" relations between Berlin and Moscow, Seibert added.


Russian authorities have said Navalny was detained for violating the terms of a suspended sentence he was given in 2014 on fraud charges. Critics view the proceedings as a pretense designed to prevent him from running for office in future elections. Monday's hearing's nominal goal was to decide whether he had violated the terms of that suspended sentence.

The leading opposition figure also faces the threat of fresh charges, as part of an investigation launched last year, that he misappropriated political donations.

Nevertheless, Navalny insisted on returning to Russiaafter receiving medical treatment for his poisoning in Germany. Russia is set to hold elections later this year.

Jake Sullivan, US President-elect Joe Biden's national security adviser, has criticized Moscow for arresting Kremlin critic Alexei Navalny, calling the Russian politician's arrest "not just a violation of human rights, but an affront to the Russian people who want their voices heard."

"Mr. Navalny should be immediately released, and the perpetrators of the outrageous attack on his life must be held accountable," Jake Sullivan wrote on Twitter.

"The detention of the opposition leader and poisoning survivor Alexei Navalny is totally unacceptable. The EU should discuss further sanctions on those involved," Landsbergis told a news agency.