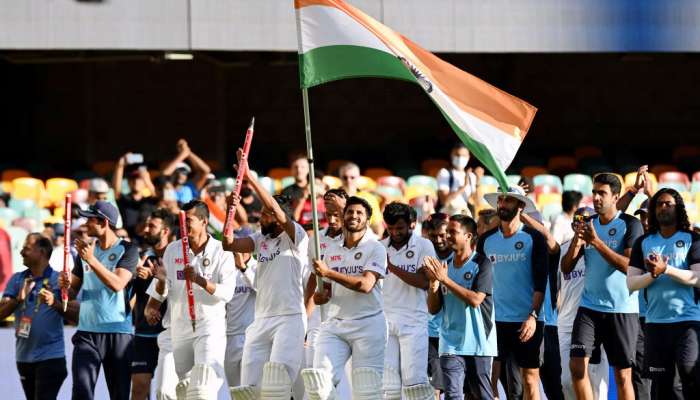 Brisbane: The fortress has been breached. It took 32 years and two months, but the unthinkable has been achieved as an injury-ravaged young Indian team beat Australia by three wickets against all odds in the final Test of the series at The Gabba on Tuesday to take the series 2-1.

Rishabh 'nerves of steel' Pant will be forgiven for all the mistakes he has made through the series with wicket-keeping gloves in hand as each of the 89 runs that he scored in the final hour on Tuesday was worth its weight in gold. It was only poetic justice that he hit a boundary to win India a thriller. The last time a visiting team came out triumphant from the Brisbane Cricket Ground was back in November 1988 when the mighty West Indian outfit under the leadership of Viv Richards thrashed Allan Border's team by 9 wickets. What makes the feat even more commendable is how the Indians fought multiple injuries and mental fatigue - due to the bio-bubble restrictions -- to register a historic win.
Having already lost Ravindra Jadeja and Hanuma Vihari going into the final Test, Jasprit Bumrah and R Ashwin too couldn't get match-fit and that saw India field a bowling attack that was led by a two-Test old Mohammed Siraj. But the lion-hearted pacer rose through the ashes like a phoenix to show he belongs at the highest level.

Coming back to the final day's action, needing 69 to win going into the last hour, any other team might have thought of ensuring a draw first. But not this Indian team which is filled with youngsters who believe in backing themselves till the fat lady sings. With swashbuckling Rishabh Pant at the crease, Australia skipper Tim Paine had no option but to keep the field open with men at the boundary. The wicket-keeper did take a few chances, but luck was smiling bright and sunny on him and he made hay.

And when Washington Sundar hit Pat Cummins for a six and a four off the last two balls of the 93rd over, it was down to 39 needed off the last seven balls. From there on, it was a game tailor-made for T20 star Pant. He went for twin boundaries in the very next over off Nathan Lyon and from there on, it was about just not committing hara-kiri.
But it all started with a 21-year-old Shubman Gill and a gritty Cheteshwar Pujara standing ground and stitching a slow yet steady 114-run partnership off 240 balls after Rohit Sharma was dismissed for 7 in the seventh over of the final morning. The wicket of the experienced campaigner was just the impetus the Australian bowlers needed to begin the day. But the duo of Gill and Pujara had other ideas.

Pujara was more than happy to take blows on his hand, head and body, but refused to budge. Gill on the other hand kept picking the gaps off the bad balls and showed class and elegance as he moved towards a well-deserved fifty before lunch. With 245 runs still needed, Gill and Pujara started off from just where they had left before lunch to keep the scoreboard ticking.

But just when it looked like Gill would score his maiden century, Lyon sent him back for 91. The walk back to the pavilion was definitely the longest he has ever had to walk. But with Pujara in the middle, the prayers were on. Skipper Ajinkya Rahane (24 off 22 balls) flattered to deceive and India went to the tea break needing 145 in the last session and Pant in the middle with Pujara.

Having taken multiple blows, Pujara was finally dismissed after scoring his slowest-ever fifty (off 196 balls) when Cummins returned with the second new ball. Mayank Agarwal (9) once again failed to hold his nerves, but Washington Sundar was there to not just play second fiddle to Pant, but also ensure he gave the wicket-keeper company till the team needed 10 more to win.

Lyon finally sent Sundar back for a 29-ball 22 as he missed an attempted reverse sweep, but the Indians still had first-innings hero Shardul Thakur waiting to see it off. But Hazlewood sent him back for 2 with India still needing three more runs. But it was too late in the day.