Don't know how many times they fouled him: Koeman defends Messi 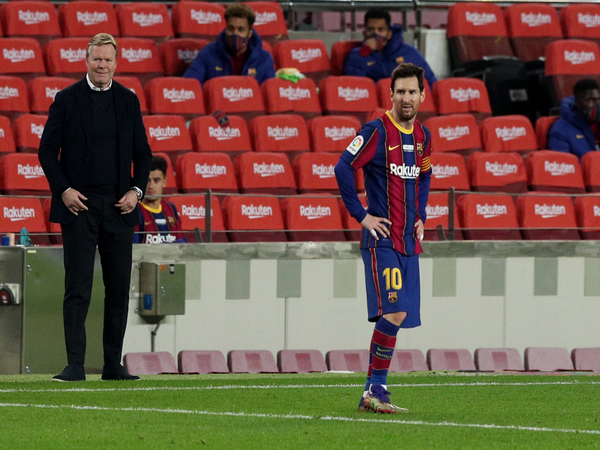 Seville: Barcelona manager Ronald Koeman defended Lionel Messi, who received a red card during the Supercopa de Espana final against Athletic Club, saying that it was a "normal" reaction from the Argentine as the opponents fouled him many times.

The red card was shown to Messi for violent conduct on Asier Villalibre, an incident that was spotted by the VAR, near the end of the clash. Messi was sent off for the first time in his Barcelona career. "I can understand what Messi did. I don't know how many times they fouled him, and it's normal to react when they keep trying to foul you as a player who is looking to dribble with the ball, but I need to see it again properly," Goal.com quoted Koeman as saying.

During the match, Barcelona's Antoine Griezmann scored a brace but it was not enough for the club to win the Supercopa de Espana final as Athletic Club clinched the title with a 3-2 win here on Monday.

Griezmann scored the opening goal of the match, putting Barcelona ahead in the 40th minute. However, the lead lasted for just two minutes as Oscar de Marcos netted an equaliser.

Griezmann then found the back of the net in the 70th minute with Barcelona again taking the lead. Athletic Club's Villalibre levelled the scores in the 90th minute before Inaki Williams scored the winning goal three minutes later.

Koeman admitted that he is disappointed with the result while stressing that his side has to be more "forceful in defence".

"We are sad, disappointed by the result. We played the final to win and not to lose that, yes, but there is no time to get off. We'll be playing soon, there's a cup and a league, there's no time for regrets. We have done positive things, we have improved. We have failed in the goals received," he said.

"We have to be more forceful in defence. We must defend better in the area and not let the opponents think, they cannot control, turn and shoot easily. We can improve. My work, I give the maximum I can. My work is not very good if we had won, nor very bad for losing. We are on the way, there are positive things, although losing today is very hard," Koeman added.