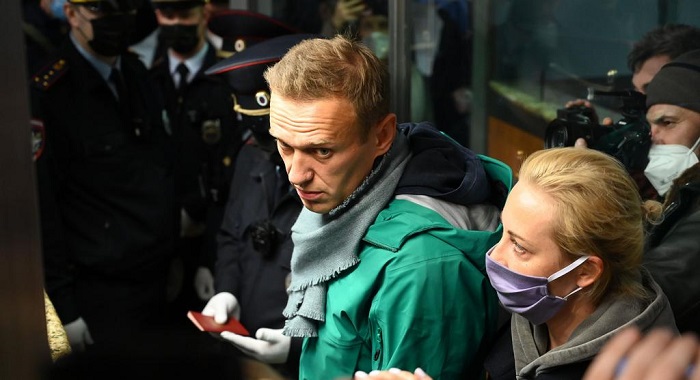 Fierce Kremlin critic and political campaigner Alexei Navalny was detained after flying out of Germany and returning to Russia on Sunday, defying warnings by Russian authorities.

His detention has been slammed by European and US officials, who are calling for Russian authorities to "immediately" release him.


After landing at Moscow's Sheremetyevo airport, Navalny said all charges against him were trumped up and that he was "not afraid of anything and asking you not to be afraid of anything," according to a video published by Russia's Dozhd TV.

Navalny also said that he never had second thoughts about returning to Russia.

He then headed to passport control where he was detained by police. His aide Ilya Yashin shared a video of the confrontation, during which Navalny is heard asking for his lawyer to be given access to him.

The police denied the request, according to Yashin.

After being detained at the airport, Navalny was taken to a nearby police station, his allies said on Twitter.

Navalny's wife, Yulia Navalnaya, said that the authorities was scared of her husband and were showing that by disrupting flights and detained a large number of people "just over a man who is returning to his motherland."

"The most important thing Alexey said tonight is that he’s not afraid. I’m not afraid either. And I call on you all not to be afraid," she told reporters before leaving Sheremetyevo.


Navalny left Berlin on a flight operated by Russian airline Pobeda and was scheduled to land at Moscow's Vnukovo airport. Just minutes before his arrival, however, Pobeda said the hub was closed for arriving planes. The screens at Vnukovo then showed the flight as being diverted to Moscow's largest airport, Sheremetyevo.

According to a Reuters reporter on board Navalny's plane, the plane's captain announced the change of course after the descent to Vnukovo had already started. The pilot reportedly spoke of "technical difficulties" before adding, with audible amusement: "Instead we will calmly make our way to Sheremetyevo airport... where the weather is great!"

While the reasons for switching airports were not immediately clear, Russian authorities have made no secret of their plans to arrest Navalny upon return. The 44-year-old called on his supporters to meet him at Vnukovo, but authorities warned against unauthorized rallies on the premises.

On Sunday, Moscow police detained several of his aides at Vnukovo airport and cleared the crowd that gathered to welcome him at his scheduled destination. Security had been tightened around the Moscow airport awaiting Navalny's arrival.

DW's Moscow correspondent, Emily Sherwin, reported from outside Vnukovo that the gathering "almost feels like a protest."

Speaking to DW TV, she said it seemed that the Kremlin "wanted at all costs to avoid him coming out to a crowd of supporters" at the airport.

"That would have been, I think, an absolute nightmare for the Kremlin," Sherwin said.

Navalny's poisoning and his subsequent investigation raised the activist's profile both abroad and in Russia, she added.