US President Donald Trump impeached by US House 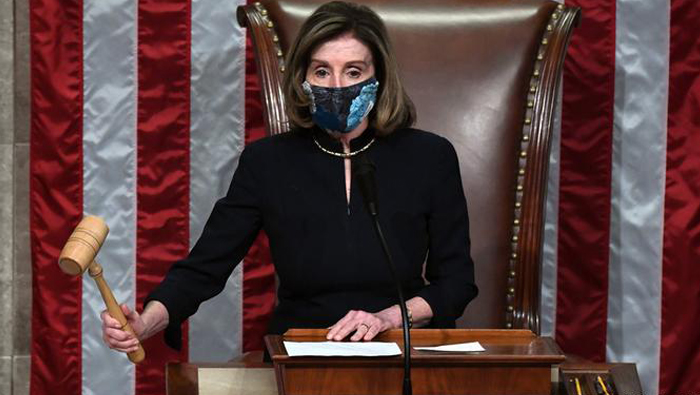 Washington: The US House of Representatives on Wednesday voted to impeach US President Donald Trump for "incitement of insurrection."

Lawmakers supporting impeachment say Trump was responsible for inciting a mob of supporters that stormed the Capitol Building last week.

The resolution to impeach passed by 232 to 197. Ten Republicans joined 222 Democrats in voting for impeachment. Trump is the first president in US history to be impeached twice.

Democrats rushed forward to launch the impeachment vote with only seven days left in Trump's term after Vice President Mike Pence rejected calls to remove Trump under the 25th amendment.


The article of impeachment will now head to the US Senate, still controlled by the Republican Party, which is set to conduct a trial on the charges. A two-thirds majority is needed to convict Trump on the charge.

The Senate will not meet again until January 19 — one day before President-elect Joe Biden's inauguration, which all but ensures an impeachment trial will take place only after Trump leaves office.

Trump is among the three US presidents who have been impeached, but he may become the first to be tried by the Senate after leaving office.

While some constitutional scholars argue that an ex-president cannot be tried by the Senate, the House has impeached and the Senate has tried former senators and judges after they left office or were no longer on the bench.

Republican Senate Majority Leader Mitch McConnell has ruled out holding an emergency session, which had been called for by Democrat Minority Leader Chuck Schumer.

"Given the rules, procedures, and Senate precedents that govern presidential impeachment trials, there is simply no chance that a fair or serious trial could conclude before President-elect Biden is sworn in next week," McConnell said in a statement issued soon after the impeachment vote.

"Even if the Senate process were to begin this week and move promptly, no final verdict would be reached until President Trump had left office," he added.

Donald Trump has become the first US president to be impeached twice. Lawmakers have accused Trump of "incitement of insurrection" following the Capitol storming.

The US House of Representatives on Wednesday voted to impeach US President Donald Trump for "incitement of insurrection."

Lawmakers supporting impeachment say Trump was responsible for inciting a mob of supporters that stormed the Capitol Building last week.

The resolution to impeach passed by 232 to 197. Ten Republicans joined 222 Democrats in voting for impeachment. Trump is the first president in US history to be impeached twice.

National Guard members standing, sitting, and laying down inside the US Capitol

Democrats rushed forward to launch the impeachment vote with only seven days left in Trump's term after Vice President Mike Pence rejected calls to remove Trump under the 25th amendment.

What have Democrats said?


In a ceremony at which she signed the article of impeachment, US House Speaker Nancy Pelosi said Trump's position as president did not confer any legal immunity upon him.

"Today in a bipartisan way the House demonstrated that no one is above the law, not even the president of the United States, that Donald Trump is a clear and present danger to our country and that once again, we honor that oath of office to protect and defend the Constitution of the United States," the top Democrat in Congress said. "And now I, sadly, with a heart broken over what this means to our country of a president who would incite insurrection, will sign the engrossment of the Article of Impeachment."

Schumer, in a statement welcoming Trump's impeachment by the House, said that regardless of when it starts "make no mistake, there will be an impeachment trial in the United States Senate."

"Donald Trump has deservedly become the first president in American history to bear the stain of impeachment twice over," Schumer said. "The Senate is required to act and will proceed with his trial and hold a vote on his conviction."

He said the Senate will not only vote on convicting Trump for "high crimes and misdemeanors" but will also hold a vote that could bar him from running for federal office again.

Ahead of the vote, Democrat Jim McGovern said that people died because of Trump's "big lies."

"We are debating this historic measure at an actual crime scene and we wouldn't be here if it weren't for the president of the United States. This was a well-organized attack on our country that was incited by Donald Trump," he said, adding that Trump "instigated an attempted coup."

"If this is not an impeachable offense, I don't know what the hell is," said McGovern.

Democrat Sheila Jackson Lee of Texas called Trump an "insurrectionist," and her Texan colleague Lloyd Doggett said, "we stopped the steal, we stopped Donald Trump from stealing our democracy and imposing himself as a tyrant."

How has Trump responded?


Trump kept out of sight in a nearly empty White House as impeachment proceedings played out at the US Capitol.

The president's suspension from Twitter meant his usual preferred means of communication was unavailable.

He was finally heard in a subdued video hours after the vote, condemning the Capitol insurrection and warning his supporters from engaging in any further violence.

Trump said nothing about his impeachment in the video, although he did complain about the ban on his social media accounts.

Where do the Republicans stand?


Liz Cheney, a member of the Republican Party leadership team, was among Republicans who voted for impeachment.

"The president of the United States summoned this mob, assembled the mob, and lit the flame of this attack," Cheney said in a statement released Tuesday.

"There has never been a greater betrayal by a president of the United States of his office and his oath to the Constitution ... I will vote to impeach the president," the statement continued.

"Although I am happy that six Republicans did stand up, I think it is indicative of the fact that so many Republicans do not want to cross Donald Trump, even as he is on his way out the door," Galen said. "I don't think it portends well for the party," he added.

Kentucky Republican McConnell reportedly said he was pleased with the Democrats moving to impeach Trump, and that he believes Trump had committed impeachable acts, the New York Times reported citing a Republican strategist, who added the Senate majority leader's distancing from the president could make it easier for the Republican party to cut ties with Trump once he leaves office.

McConnell said on Wednesday he had "not made a final decision" on how he will vote, and that he would "listen to the legal arguments when they are presented to the Senate."