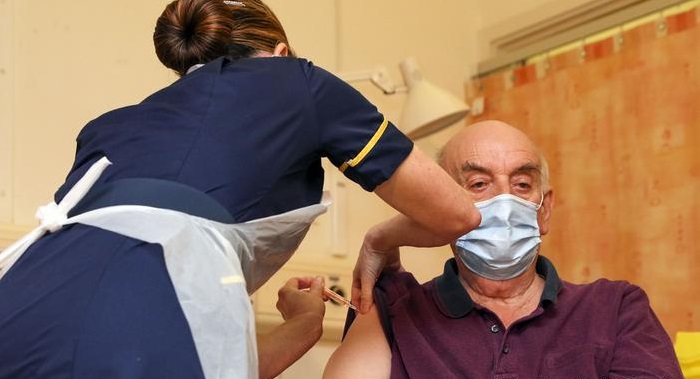 The UK began vaccinating citizens with the Oxford-AstraZeneca coronavirus jab amid a surge in cases.

Brian Pinker, an 82-year-old dialysis patient, was the first person to receive the vaccine at a hospital a few hundred metres away from where it was developed.

"I am so pleased to be getting the vaccine today and I'm really proud that it is one that was invented in Oxford," he said. "The nurses, doctors and staff today have all been brilliant and I can now really look forward to celebrating my 48th wedding anniversary with my wife Shirley later this year."


As many as half a million doses are ready to be administered over the next 24 hours, the British government said.

It also can be stored in regular refrigerators, making it easier for GPs and healthcare workers to distribute.

British Health Secretary Matt Hancock said in an interview with broadcaster Sky News on Monday that it was "a triumph for British science" and "a pivotal moment" in fighting COVID-19.

Germany's BioNTech, along with its US partner Pfizer, was the first company in the world to develop an effective vaccine against the virus.

Hundreds of thousands of Britons have already had their first shot of the BioNTech-Pfizer vaccine.


On Sunday, the UK recorded more than 50,000 new coronavirus infections for the sixth day running.

Keir Starmer, the leader of the opposition Labour Party, called on Prime Minister Boris Johnson to impose a third nationwide lockdown in England to curb the rise in cases.

The UK has seen an uptick in infections after authorities announced they had discovered a new variant of the virusthat appears to be more contagious.

"It is a very difficult situation in terms of the growth of the virus," Hancock said.

Asked whether the government was considering imposing a new national lockdown, he answered: "We don't rule anything out."

The other parts of the United Kingdom are responsible for their own health policies.

Northern Ireland and Wales are already under lockdown. The Scottish government is currently reviewing what to do next.