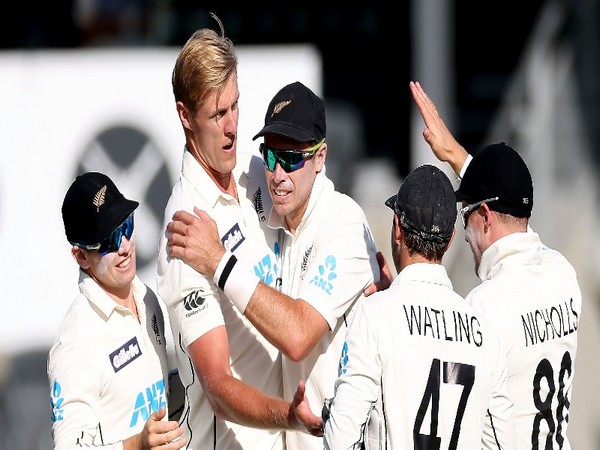 Christchurch: New Zealand's Kyle Jamieson scalped five wickets on Day 1 of the second Test against Pakistan but with the help of Azhar Ali and Mohammad Rizwan's brilliant show, the visitors managed to rack up a decent total in their first innings here on Sunday.

New Zealand bundled out Pakistan on 297 in 83.5 overs on the opening day of the second Test. After being asked to bat first, Pakistan witnessed a poor start as Shan Masood was given LBW off Tim Southee's delivery in the third over. Abid Ali was then joined by Azhar on the field. The duo took the team over the 50-run mark but soon after that, Jamieson picked his first wicket of the day, removing Abid (25).

Jamieson dismissed Haris Sohail and Fawad Alam as well in his subsequent overs, reducing Pakistan to 83/4. The match then witnessed a brief halt due to rain. The play resumed shortly with Azhar and Mohammad Rizwan on the field.

Azhar and Rizwan played brilliantly and brought the visitors back in the game. Both completed their respective half-centuries, taking Pakistan over the 150-run mark. As the visitors' started to gain some momentum, Jamieson struck again and sent Rizwan back to the pavilion. Rizwan scored 61 runs before being caught behind which brought Faheem Ashraf out in the middle.

Matt Henry then dismissed Azhar, who fell seven runs short of completing his century. Jamieson then got hold of Ashraf, who played a knock of 48 runs. After the completion of 72 overs, Pakistan were playing on 260/7, with

Zafar Gohar and Shaheen Afridi on the field.

The duo managed to add 22 runs on the board before Southee removed Gohar (34) and Trent Boult dismissed Afridi (4). Boult then picked the wicket of Naseem Shah as Pakistan's first innings came to an end.