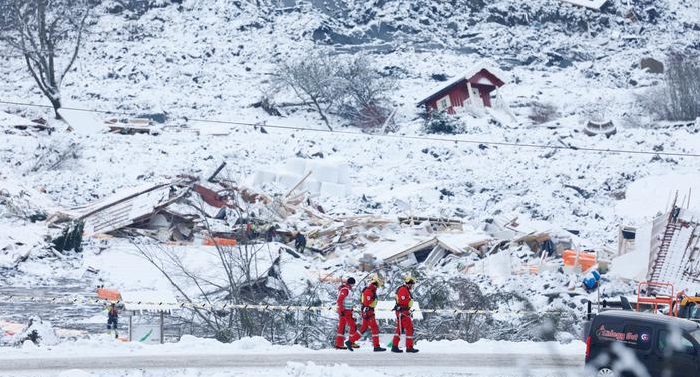 A police statement announced that "just before 6 a.m. a deceased person was found."

Rescue teams again worked through the night in the vicinity of the landslide, where five people, including two children, are still thought to be missing.

A fourth body was uncovered on Saturday.

Police also confirmed that the first body they had found on Friday was of a 31-year-old man.

Search teams have been hindered by unstable ground, poor weather conditions and a limited number of daylight hours.

As such, they have resorted to the use of heat-sensitive drones, helicopters and rescue dogs.

Authorities say the chances of a second landslide are relatively low.


On Wednesday morning, a torrent of mud buried parts of the Ask village, 25 kilometers (15 miles) northeast of the capital Oslo.

At least 10 people were injured, one of which had to be transported to Oslo for treatment.

There had been warnings of potential accidents due to the clay since 2005.

Prime Minister Erna Solberg called it one of the biggest landslides in the country's history.

Norway's King Harald V and his family were planning to visit the village on Sunday to pay their respects.

More than 1,000 people from the 5,000 living in the village were evacuated and authorities said that up to 1,500 may have to be relocated.