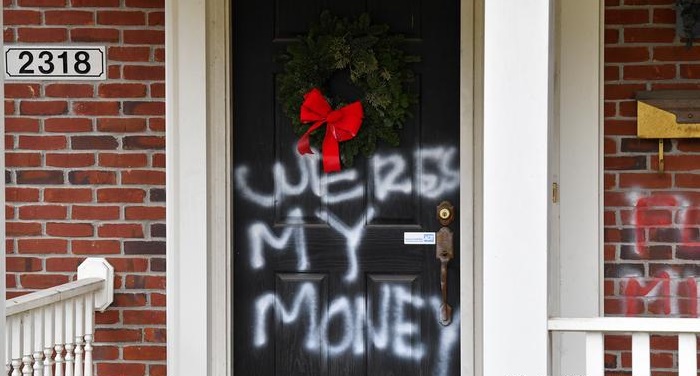 The homes of US Senate Majority Leader Mitch McConnell and Speaker of the House of Representatives Nancy Pelosi were vandalized over the New Year holidays in apparent acts of protest.

The troublemakers, angered by McConnell's refusal to increase the US coronavirus stimulus relief checks, on Saturday scrawled on the Republican's Kentucky home door: "Weres [sic] my money."

The vandals also spray-painted his window with the words: "Mitch kills the poor."

A day earlier, reports emerged that someone had spray-painted a similar message on the garage door of Pelosi's San Francisco home.

A photo published by a tabloid on Twitter showed the words, accompanied by an anarchist symbol: "Cancel rent! We want everything!"

The vandals had also left a pig's head and fake blood on the Democrat's driveway.


McConnell, who even defied Trump's demand to increase pandemic relief checks for most US residents from $600 (€494) to $2,000, responded to the incident by calling it a "radical tantrum."

"I've spent my career fighting for the First Amendment and defending peaceful protest," the Republican lawmaker said. "I appreciate every Kentuckian who has engaged in the democratic process whether they agree with me or not. This is different. Vandalism and the politics of fear have no place in our society,'' he said.

A police spokesman told AP that there were currently no suspects.

A bill to increase the relief payments was passed by the Democrat-controlled House of Representatives but then blocked by Senate Republicans, led by McConnell, on New Year's Day.

Congress had already approved the lower payments in late December. The government has already started sending out the payments as part of the scheme giving $600 to all Americans earning less than $75,000.

Critics have said that the one-time payment will bring little benefit to the many people who have been left in difficult financial circumstances due to the pandemic.