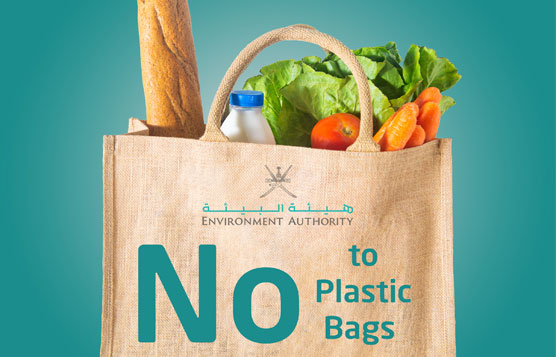 Muscat:  People in Oman found using single-use plastic bags will be required to pay a fine ranging from OMR100 to OMR2,000, after the ban comes into effect on 1 January, 2021.

The Environment Authority (EA) decided to impose this fine so that people would understand the importance of following practices that help safeguard environment.

“The authority will go ahead with the decision to ban single-use plastic bags,” said Ahmed bin Zahir Al Hinai, the Director General of Environmental Affairs at the EA. “This is part of our plans to preserve the Omani environment from pollutants and waste considered harmful to it and the rich wildlife of our country.”

The decision is part of the provisions of the Environmental Protection and Pollution Control Law, which was passed through Ministerial Decision No. 114/2001, to achieve more harmonisation and integration of the objectives of sustainable development, according to its indicators under the national action plan for the management of plastic products and their waste.

“This decision has come after a series of studies carried out by the authority, as well as workshops in cooperation with the relevant government and private agencies,” Al Hinai said. “An appropriate and sufficient period had been set from the time this decision was announced, until it comes into force, so that we can make sure it is properly implemented.

“This will help in the decision not having a negative effect on either manufacturers of bags, or consumers,” he went on to say. “It will help them keep pace with the developments and subsequent changes in our policies, which are in keeping with treaties that have an effect at global level.”

The decision by the EA was made to stop plastic bags from polluting the environment, and was signed into law with the issuance of Ministerial Decision No. 23/2020. Oman took this step after observing other countries that implemented similar decisions to prevent single-use plastic bags, with their banning also helping preserve marine and land-based wildlife.

“The authority expects to go ahead with this decision, and, in collaboration with the Ministry of Commerce, Industry and Investment Promotion (MOCIIP), we will ensure all appropriate measures are taken so that companies and individuals follow the law in this matter.”

Fines ranging from OMR100 to OMR2,000 will be imposed on businesses and individuals found using plastic bags after the ban comes into effect. This fine will be doubled for repeat offenders, although more severe punishments can be enacted by the Environment Authority, depending on the severity of the offence caused.

The plastic bag ban is just one of many projects which the EA will follow up in 2021: a meeting was held at the body’s headquarters on 30 December to chart out their plans for the next year, as well as the methods to track their progress both before and after they have been implemented. The meeting was held in the presence of Dr Abdullah bin Ali Al Omari, the EA’s chairman.

Plastic bags have been known to cause plenty of damage to the environment, as well as living organisms. Among the problems of excessive plastic bag consumption are the extremely long time taken for them to decompose, leading to their chemicals leaching into the land and water.

Fragments of plastic bags – some at a microscopic level – also tend to enter the food chains of mammals and birds, resulting in many long-term health problems in those who unknowingly consume them. When exposed to sunlight, the lead in these bags tends to react with the other chemical components found in them, leading to the creation of very harmful compounds.

When picked by wind and water and transported across long distances over land and water, they might sometimes be eaten by animals and fish, who die because of the toxic materials used to make them.