We Love Oman: The age-old tradition of pottery-making 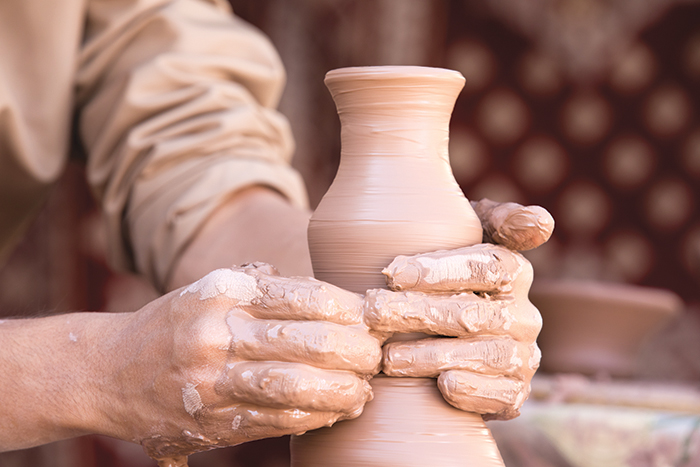 Pottery has been an intrinsic part of Oman’s heritage and culture for more than 4,000 years. While today it is mainly used as decorative pieces in most households, utensils made of clay items were a daily necessity in the Sultanate in ancient times. In Oman, apart from many traditional industries and handicrafts, the pottery industry is one of the most prominent industries. Bahla in A’Dhahirah Governorate has been one of the main producers of pottery items in Oman. The soil found there is rich in red clay that is used for making the utensils.

Well crafted by the pottery artists, these are now mostly found in souqs and local markets as souvenir items. Jihal, Khuroos, and Brams are some of the clay utensils.
While Jihal has a pointed shape with a beak mostly used for water storage, Khuroos has a flat base meant for storing dates, dates syrup and honey. Brams are stronger than Jihal and Khuroos and are generally used for cooking.

According to Oman’s Ministry of Tourism, “Pottery-making in Oman is considered an ancient industry. The reason it has attracted much interest can be attributed to the multitude of its uses in Omanis’ daily lives. Pottery is of many kinds and shapes, and its uses and manufacturing materials vary.”