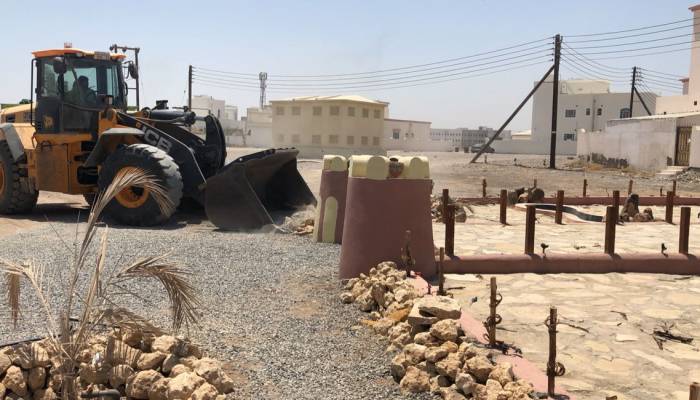 Encroachments pose a challenge to municipal work and the Muscat Municipality is making all efforts to stop it.

Muscat: The issue of illegal encroachment and random possession has taken centre-stage in Muscat.

The Muscat Municipality has confirmed that it will continue to take all necessary measures in coordination with the concerned authorities to stop the phenomenon of illegal holdings, to preserve public property and prevent its seizure. It also affirmed the role of society in cooperating with the municipality’s call for not allowing this phenomenon to persist.

The municipality has opened a file on this phenomenon at the level of the wilayats of Muscat Governorate to make the community aware of its dimensions and its societal impact in terms of health, security and safety.

Engineer Badr bin Ali Al-Bahri, Director General of the General Directorate of the Municipality of Muscat in Seeb, explained that this phenomenon, with its various types, is one of the challenges facing municipal work and among the common abuses of technical requirements for existing homes and buildings, and dealing with them requires speed and firmness in taking the necessary measures in their regard.

Fahd bin Abdullah Al-Azri, Head of the Awareness Programmes Department of the Department of Community Partnership on the Forms of Holdings, said that illegal encroachments may take various forms including: building random annexes inside homes or farms, building caravans by illegal methods, fencing a range of lands to be used as sheep pens, laying brick pillars on paved lands, afforestation work outside their fences, additions to fixed or mobile materials in existing buildings, exploitation of old farms in order to accommodate expatriate workers, cutting mountains, leveling them, or fencing them with fixed materials, and digging wells on government land by illegal ways.

Al Azri added, “Muscat municipality has created a regulation to allow such work in accordance with the issuance of the necessary permits to limit the process of unauthorised additions and to avoid the technical risks resulting from leniency in the safety standards that are required for construction as there are permits from the municipality dedicated to the establishment of annexes in residential homes.”
Engineer Badr Al-Bahri explained that the number of random holdings registered in the Wilayat of Seeb reached 22 holdings until the end of November 2020 compared to 18 holdings during 2019.

Eng. Hilal bin Saeed Al Maamari, Head of Technical Inspection Department at the General Directorate of Muscat Municipality in Al Amerat said, “the municipality is making strenuous efforts to stop this phenomenon, whether in terms of meeting contractors or citizens alike, to make them aware of the laws and procedures in force in this regard. The Municipality is also working to urge society to abide by and reject such phenomena by reporting about them.”  Al Amerat Directorate recorded and dealt with about 28 cases of random possessions during the year.

Adnan bin Muhammad Al-Kindi, Director of the Legal Follow-up Department at the General Directorate of Muscat Municipality in Bausher, said that in 2019, the Directorate registered 22 possessions, while during this year it recorded about 20.

He added that Muscat Municipality takes the decision to remove random possession after verifying that there are no documents indicating its legality within the monitored sites that have holdings and buildings in violation of the laws and regulations in force.
Mohammed bin Salem Al Mahrouqi, Media Coordinator at the General Directorate of Muscat Municipality in Muttrah rah Al-Kubra, spoke about the procedures for dealing with unknown holdings.

He said, “The municipality deals with it by placing a sign on the site and through it the violation of possession is shown with the need to review the competent department at the Directorate. In the event of the presence of the violator, the procedures followed regarding the violations shall be completed, but in the event of non-attendance and lack of knowledge of the owner thereof. The Municipality contacts the sheikh of the region to find out the owner of it, and in case that is not possible, the violation is filed against an unknown person to the legal follow-up department in the competent directorate and the rest of the procedures are completed and referred to the public prosecution to issue a ruling for removal.” This year Muttrah recorded 31 random holdings.