Spain plans register for those who refuse COVID vaccine 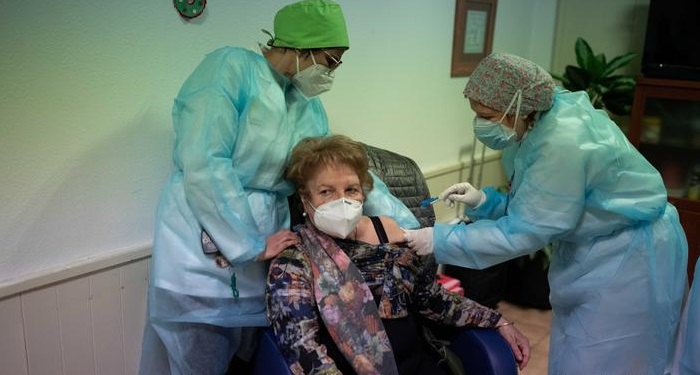 Spain will create a database of those who refuse to be vaccinated against coronavirus and share it with the rest of the EU, the country's health minister has said.

Salvador Illa told La Sexta television on Monday that the list would be private and would be complied in line with the law.

"It is not a document which will be made public and it will be done with the utmost respect for data protection," he said in the broadcast interview.

Illa added that the way to defeat the virus was "to vaccinate all of us — the more the better".

"What will be done is a registry, which will be shared with our European partnersof those people who have been offered it and have simply rejected it," he said.

How open are people in Spain to the vaccine?


The proportion of Spaniards unwilling to take a COVID-19 vaccine has plunged to 28% in December from 47% last month, according to a poll published last month.

The survey by the state-funded CIS research institute found 40.5% of respondents are willing to have the jab while 16.2% would do so if it is shown to be "reliable".

Regional authorities will contact people when it is their turn to be inoculated, the government said on Monday.

The government expects to have between 15 million and 20 million people out of its population of 47 million vaccinated against the virus by June.

What is the current situation in Spain?


As in other EU countries, Spain launched its vaccination drive on Sunday. Araceli Hidalgo, a 96-year-old woman from Guadalajara, was the first person in the country to get the jab.

Spain is one of the worst-affected countries in Europe. The government has bought doses of the German-developed BioNTech-Pfizer vaccine, although it is not mandatory.

More than 50,000 people have died from COVID-19 in Spain, official figures show, with more than 1.8 million infections registered.

A nationwide curfew is in place on the Spanish mainland between 11 p.m. and 6 a.m. that is set to expire in May. Non-essential businesses, such as restaurants and bars, have been closed, and incoming flights from the UK have been severely restricted owing to fears surrounding a new variant of the virus.Only Spanish nationals or legal residents may enter the country by air from Britain.