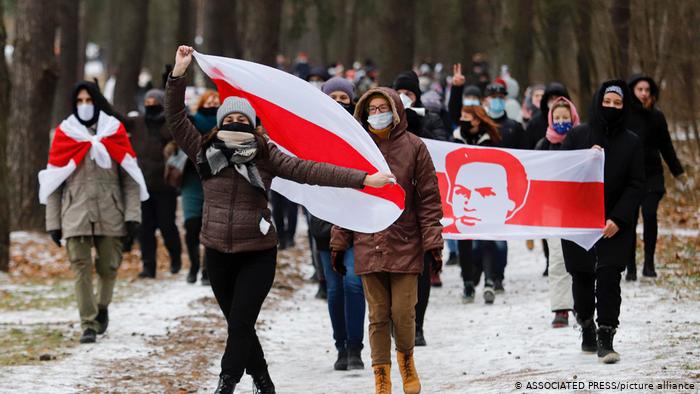 Hundreds of demonstrators marched through the streets of Belarus on Sunday to protest against President Alexander Lukashenko, who has ruled the country for more than a quarter century.

Local human rights center Viasna said 13 people had been detained during the traditional weekend protests — 10 in Minsk and three more in other Belarusian cities.

Belarus media reported that groups of people took part in small rallies scattered throughout the country and that heavy security forces were also present in Minsk.

Videos showed protesters with red and white flags marching through courtyards in residential areas of the capital, chanting "Long live Belarus!" and "As long as we're united, we're invincible.''


The democracy movement had called on Belarusians to release balloons as part of the protest.

At around noon local time on Sunday, hundreds of red and white helium-filled balloons rose to the sky in Minsk.

"It is enough to open the window and let the balloon take off," an earlier appeal from the opposition said, pointing out that people did not have to leave their homes in order to protest.

The former Soviet nation has been rocked by mass protests every weekend since Lukashenko claimed victory in an August 9 election that gave him a landslide win over his popular opponent Sviatlana Tsikhanouskaya. Tsikhanouskaya, currently living in exile in Lithuania, and her supporters have maintained the election was rigged.

The opposition's Coordination Council, set up just after the election to push for a transition of power, issued a statement on Sunday thanking Belarusians for continuing their efforts.

"The Coordination Council is grateful to brave Belarusians that don't stop despite intimidation and trumped-up accusations in order to draw nearer a life in Belarus that we dream of and deserve," the statement said.

"We know that Belarusians are going into the new year with a common dream and [we] are convinced that we can't be stopped along the way."

There have been more than 30,000 detentions since the protests began.