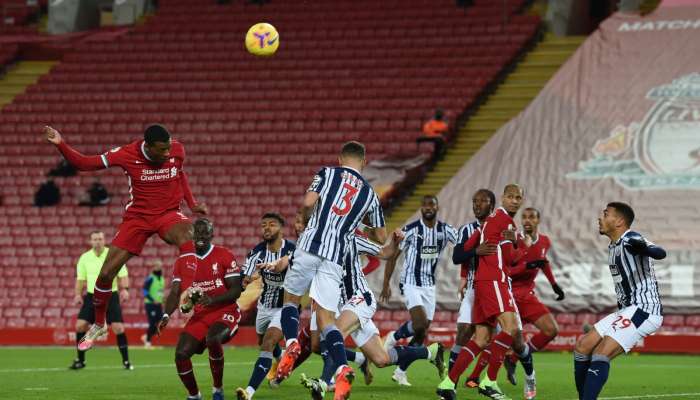 London: Liverpool was stunned by West Brom as Sam Allardyce's side produced a smash and grab raid at Anfield to steal a 1-1 draw after being totally outplayed in the first 45 minutes of the game.

Liverpool midfielder Jordan Henderson completed more passes than the entire West Brom team in the first half, and the only surprise at the break was that only Sadio Mane's 12th-minute goal separated the two teams.

West Brom improved hugely in the second half and got their reward when Semi Ajayi towered above the home defense to head home the equalizer eight minutes from time.

Liverpool also suffered another injury blow with central defender Joel Matip forced off with a possible groin injury, which looks likely to see him miss out on their trip to Newcastle on Tuesday.

Tottenham was unable to capitalise on Liverpool's slip-up as they were held to a 1-1 draw away to a Wolverhampton Wanderers side that fielded seven Portuguese players in their starting 11.

Tanguy NDombele put Spurs ahead from outside of the area in the first minute, but Wolves rallied well, and Romain Saiss headed home the equalizer five minutes from times and but for a fine save from Hugo Lloris in the last minute, Fabio Silva would have left Spurs with no points from the game.

West Ham and Brighton shared four goals in an entertaining game at the London Stadium in which Brighton twice took the lead, with the first goal coming from Neal Maupay's close-range finish and the second from Lewis Dunk.

However, West Ham fought back twice to salvage a point thanks to Ben Johnson's first goal for the club and Tomas Soucek's decisive finish eight minutes from time,

Patrick Bamford's fifth-minute penalty was enough to give Leeds United three vital points at home to Burnley. The forward scored the spot-kick after Burnley keeper Nick Pope had brought him down. However, the visitors thought they had equalized 14 minutes later only for Ashley Barnes' header to be ruled out for a previous foul on Leeds goalkeeper Illan Meslier.