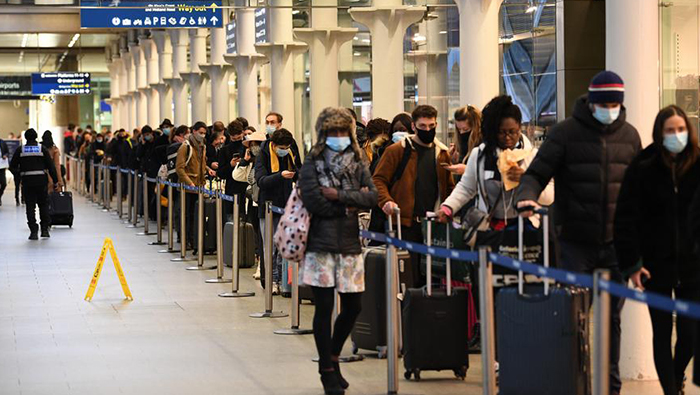 Brussels: British Prime Minister Boris Johnson will chair a meeting of the government's emergency committee on Monday, amid a wave of travel bans and major transport disruption over a new strain of COVID-19.

The meeting comes as Britain was effectively shut off from the rest of Europe in an effort to stem the spread of the new strain — which has primarily hit London and southeastern England.

EU meets to coordinate response
Meanwhile on the continent, European Union ambassadors are also holding their own crisis talks later on Monday to coordinate the bloc's response to the new strain.

Officials hope to establish Europe-wide sanitary measures "in the coming hours" that would allow traffic flows to the UK to resume, French Transport Minister Jean-Baptiste Djebbari said, according to Reuters news agency.

German Foreign Minister Heiko Maas said that the travel restrictions were triggered to prevent an "uncontrolled introduction" of the virus, but that the response must now be coordinated across the EU's 27 member-states.

"Ultimately, we don't have enough conclusive information to definitively assess the situation — but we have to be careful," Maas said.

Trucks and other freight haulers are facing massive disruptions after many European countries promptly cut transport ties to the UK on Sunday and Monday. Eurotunnel services have been suspended, while Eurostar passenger trains from London to Brussels, Paris, and Amsterdam have been halted.

What do we know about the new COVID strain?
Last week, British health officials identified a new coronavirus strain. On Saturday, British Prime Minister Boris Johnson said the mutation appeared to be more transmissible, although scientists are still reviewing data and have yet to reach a final conclusion.

British health authorities say the variant does not lead to an increase in cases of severe illness, and does not cause more serious side effects.

Researchers are still evaluating whether the strain will be more or less receptive to the vaccines currently being rolled out.
Although no final conclusions have been made, health authorities have said the strain will not likely have an impact on the effectiveness of the vaccines.