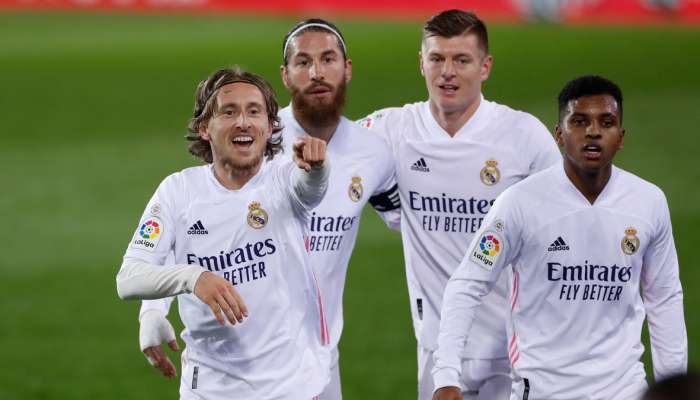 Madrid: Real Madrid moved up to second in La Liga after a controversial 3-1 win away to Eibar.

First half goals from Karim Benzema and Luka Modric after an excellent start from Zinedine Zidane's side set them on their way to a fifth consecutive win, but Kike Garcia's magnificent strike brought Eibar back into the game.

Eibar should have had a penalty eight minutes from time when the ball clearly struck Sergio Ramos's elbow, which was away from his body, but neither the referee nor the VAR decreed a penalty and with Eibar chasing an equalizer, Lucas Vazquez added a third for Madrid on the counter-attack.

Atletico Madrid remains six points clear at the top of La Liga with a 3-1 win at home to Elche on Saturday afternoon.

Luis Suarez opened the scoring four minutes from halftime and doubled his tally in the 58th minute when he once again showed his goal-scoring instinct.

Lucas Boye threw Elche a lifeline with a powerful header in the 64th minute, before Diego Costa sealed the win from the penalty spot.

Real Sociedad slipped up again as they lost 2-1 away to Levante - their eighth game without a win. Alexander Isak's deflected shot put Real Sociedad ahead after 21 minutes, but Roger Marti's sharpness in the penalty area drew Levante level seven minutes later and Jorge de Frutos decided the game four minutes from time.

Villarreal closed to a point of Real Sociedad with a 3-1 win away to the bottom of the table Osasuna. Gerard Moreno scored twice along with Fernando Nino as Villarreal's task was made easier by Aridane's direct red card after just 18 minutes.

FC Barcelona disappointed again as they dropped two more points in a 2-2 draw at home to Valencia.

Dreadful defending allowed Mouctar Diakhaby to head Valencia in front in the 29th minute, before Leo Messi equalized in the fourth minute of injury time with a header after his penalty, for a foul by Jose Luis Gaya, had been saved.

It was Messi's 643rd goal for Barca, equaling Pele's record of goals for a single club.

Ronald Araujo volleyed Barca ahead in the 52nd minute, but Maxi Gomez flicked in the equalizer with 21 minutes left to play and Barca never looked like scoring a winning goal in the last 20 minutes.

Sevilla missed the chance to leapfrog Barca after a late equalizer condemned them to a 1-1 draw at home to Valladolid. Lucas Ocampos put Sevilla ahead from the penalty spot on the half-hour, but they paid the price for sitting back when Raul Garcia's volley leveled the score four minutes from time.

Brais Mendez scored a goal in each half as Celta Vigo made it four wins in their last four games under new coach Eduardo Coudet. Brais' first goal came after 19 minutes with a header following a cross from the left wing, while his second came 11 minutes from time as he smashed home a pass from Iago Aspas.

Granada won their local derby 2-0 at home to Betis thanks to goals from veteran striker Roberto Soldado in the 13th and 19th minutes.

Meanwhile, Getafe got back to winning ways with a 2-0 triumph away to Cadiz thanks to a first half goal from 'Cucho' Hernandez and an injury time strike from Nikola Maksimovic.