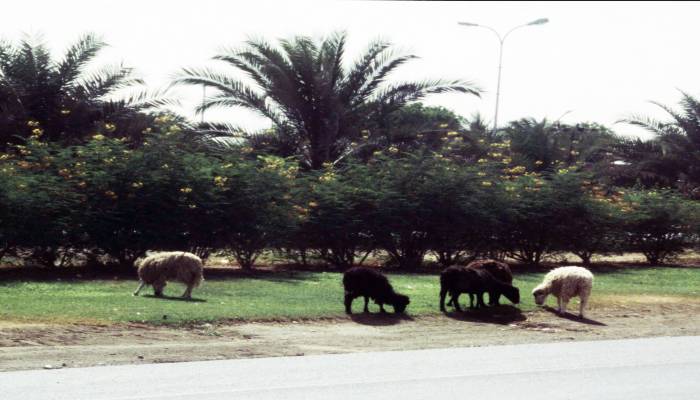 Muscat: Pointing out that close to 400 communications about animals being kept or found roaming in urban areas  were received in the last in the last three years, Muscat Municipality has  reminded  animal owners of their responsibility of keeping them under control.

It has further said that besides impeding municipal landscaping efforts, stray animals like sheep are a source of annoyance to individuals in residential neighbourhoods. The Muscat Municipality still receives some reports from the community about the presence of animals wandering in residential areas within the cities, it said.

Pet owners leaving their animals unrestrained in public areas and residential neighbourhoods contravenes the cultural values and organisational efforts of municipalities to maintain an optimal urban environment. It also creates societal, economic and traffic safety risks as animals wander in the streets or residential areas and graze on public landscapes.

In 2019, there were 95 registered reports, including 28 related to keeping animals in neighbourhood homes. Al Rahbi added that the Muscat Call Centre registered 102 reports this year, bringing the total number of registered communications during the last three years to 390.

The local ordinance no. 24/91 regulates animal husbandry according to a number of articles, as it obliges the individual to comply with the provisions and requirements for the organisation of animal husbandry within the prescribed scope and limits of Muscat Municipality.

This ordinance prohibits of keeping animals in certain places in Muscat governorate, while allowing them to be kept in private farms and gardens or special places, provided that they are approved by the municipality, and meet the health conditions determined by them and issuing a licence to do so.

The local ordinance also states that animals are not to be left neglected in streets and squares, nor are they allowed to graze except without appropriate supervision, and only in places allocated for grazing.

The regulation also authorizes any municipal employee or police officer who finds a stray animal to seize it and hand it over to the municipality corral.

Anyone who violates any provision of this ordinance shall be punished with a fine, with the obligation of making appropriate compensation for any damage that the animal may cause to the property of others.

The Muscat Municipality expressed its appreciation for the cooperation of the community in reporting the presence of stray animals, and highlighted the role and responsibility of owners to abide by the local ordinance and preserve the property of others.