Coronavirus: What we know about the UK's new COVID strain 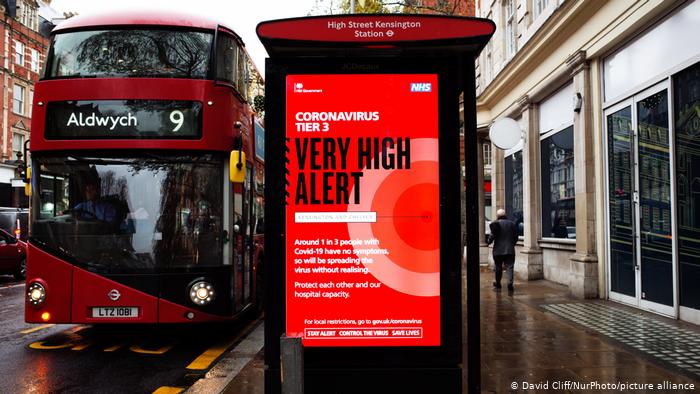 London: A new variant of the coronavirus is sweeping across London and southern England. Scientists believe it is significantly more contagious than other strains. Here's what we know so far.

A new strain of coronavirus is sweeping across southern England, spurring heightened restrictions in the region and flight bans within Europe.

So what do we know about the new virus mutation?

UK Prime Minister Boris Johnson said the fast-moving new variant of the virus is 70% more transmissible than existing strains, and appears to be driving a rapid spike in new infections in London and southern England.

However, "there's no evidence to suggest it is more lethal or causes more severe illness," or that vaccines would be less effective against it, he said.

Britain alerted the World Health Organization that the new strain — identified last week — was the likely cause of the surge in infections, accounting for around 60% of London's cases.

Just over 1,100 Covid-19 cases with the new variant had been identified as of Sunday, according to a statement from Public Health England. The strain was also detected in South Africa last week.

In response to the surge, Johnson announced a stay at home order for the capital and southeast England, until at least December 30, to slow the spread of the disease.

"We’re learning about it as we go, but we already know enough, more than enough, to be sure that we must act now," Johnson said during a press conference on Saturday. "When the virus changes its method of attack, we must change our method of defense."

"Given how much faster this new variant spreads, it's going to be very difficult to keep it under control until we have the vaccine rolled out," Health Minister Matt Hancock told Sky News.