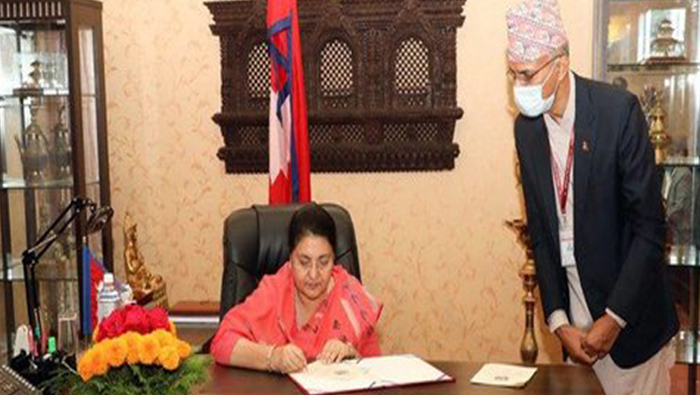 Kathmandu: Hours after Nepal Prime Minister KP Sharma Oli recommended the dissolution of Parliament on Sunday, the country's President Bidhya Devi Bhandari ratified the proposal and announced dates for the elections to be held next year.

"Nepal President ratifies the proposal of parliament dissolution presented forward by Prime Minister KP Sharma Oli," President Office said in a press release. Upon the recommendation of the council of ministers, President Bhandari also announced the date of the national polls to be held in two phases on April 30 and May 10 in 2021.

This comes after Prime Minister Oli had summoned an emergency meeting of the Council of Ministers after a series of meetings with the party's leadership and ministers on Saturday.

Oli was under pressure to withdraw an ordinance related to the Constitutional Council Act that he had issued on Tuesday and got endorsed by President Bidya Devi Bhandari.

The Nepal PM has been facing pressure from the rival factions of the NCP led by former prime ministers Pushpa Kamal Dahal and Madhav Nepal.

Earlier on Sunday, Prachanda reached PM residence to get first-hand knowledge on the issue. However, PM remained reserved and didn't say anything except that "he will take a firm action today".

Prime Minister Oli convened the cabinet meeting at 9:45AM and made the decision in less than an hour.

The latest step of the Oli-led administration comes amid a rising rift inside the ruling party and the house adjourned for the longest period of time in Nepal's history. Since the Constitution does not have a provision for the House dissolution, the move is likely to be challenged in the court.

Subsequently, the cabinet has forwarded the proposal of dissolution of the Parliament to the President for consideration. Usually, the President is consulted in advance on these issues by the Prime Minister.

Accordingly, the President should approve the dissolution of the parliament.

This will lead to strong opposition from the Prachanda and Madhav Nepal camp and they are likely to protest and even file a writ in the Supreme court challenging this position taken by Prime Minister Oli.

Reacting swiftly after the confirmation of the decision, Narayankaji Shrestha, Spokesperson of the ruling Nepal Communist Party reacted calling it undemocratic.

"I got to know about the recommendation just now. The decision has been made in haste as all the ministers weren't present in the cabinet meeting this morning. This is against the democratic norms and would take the nation backward, this can't be implemented," Narayankaji Shrestha, Spokesperson for the ruling Nepal Communist Party told ANI.