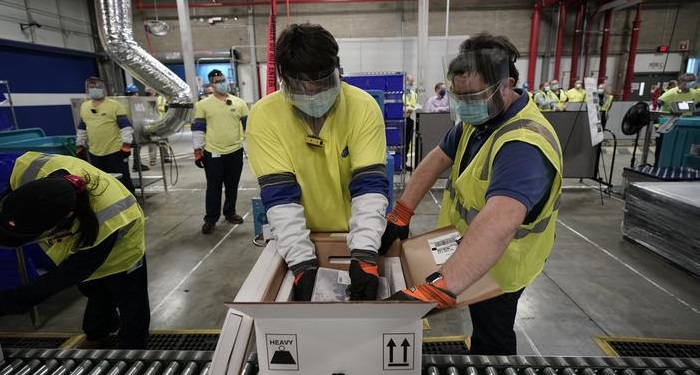 The first shipments of the BioNTech-Pfizer vaccine were sent out to distribution centers across the United States on Sunday.

It was the first step in a massive COVID vaccine rollout in the world's worst-hit country — with vaccinations expected to begin on Monday.

Workers at a Pfizer factory in the city of Kalamazoo, Michigan, packed the first shipments of the vaccine in boxes layered with dry ice.

Refrigerated trucks carrying the first shipments were escorted to a nearby airport by security officers wearing body armor.

The first shipments of the vaccine, co-developed with German pharmaceutical firm BioNTech, will be staggered. On Monday, 145 distribution centers will receive the first doses. An additional 425 sites will get shipments on Tuesday while the another 66 centers will get the vaccine on Wednesday.

The distribution comes after US regulators with the FDA authorized emergency use of the vaccine late on Friday — following similar moves by Canada and the United Kingdom.


The vaccine must be stored at around -70 degrees Celsius (-94 Fahrenheit), which presents a logistical challenge being met by dry ice and specially designed refrigerators.

When the vaccine arrives at health care facilities, state and local public health authorities will administer doses using guidance from the Centers for Disease Control (CDC) and the FDA.

The vaccine is being distributed based on each state's adult population.

Who will get the vaccine first?


The first in line to get the shot in the US will be front-line health care workers and elderly residents in nursing homes.

The BioNTech-Pfizer vaccine requires two doses that are given around three weeks apart.

Pfizer has said up to 25 million doses can be provided in the US by the end of the month. A total of 100 million doses have been preordered.


The US aims to immunize 100 million people — or around 30% of the population — by the end of March, Dr. Moncef Slaoui, the chief science adviser to the US operation to quickly develop vaccines, told Fox News.

"It is however critical that most of the American people decide and accept to take the vaccine," Slaoui said. "We are very concerned by the hesitancy that we see."

In order for the US to reach "herd immunity" to halt the transmission of the coronavirus, some 75% to 80% of the country would need to be vaccinated, he said.


The vaccine rollout comes as the US continues to set new daily records in coronavirus cases and deaths.

The US now has reported more than 16 million cases of coronavirus since the pandemic began, having added over 1 million new cases since December 8. The death toll currently stands at more than 298,000.