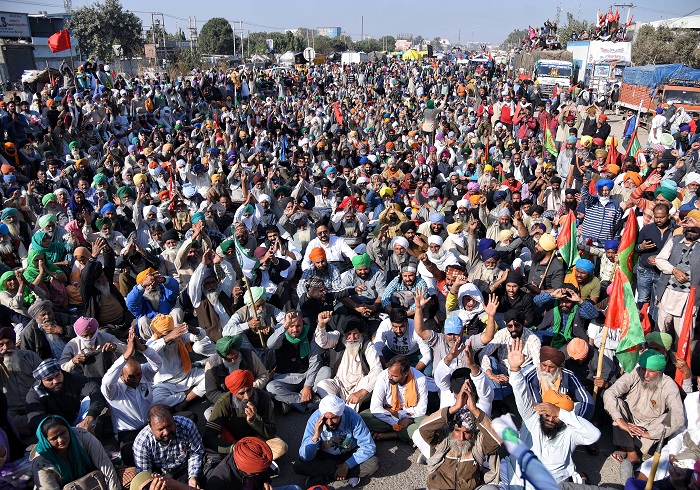 New Delhi: Farmers, mostly from Punjab and Haryana on Saturday morning began arriving at the Nirankari Samagam Ground on the outskirts of the national capital for a protest against the new farm laws.

After days of a standoff with police and after facing teargas shells, water cannons and barricading on various points on the Delhi-Haryana border by police, the farmers 'Dilli Chalo' march was allowed to enter Delhi on Friday and proceed to the ground in Burari situated in its north-west. The Tikri border was opened up for them. Braving Delhi's cold, some of the farmers were seen cooking food in the open field this morning.

"Our protest will continue till the farm laws are not withdrawn. We are here for the long haul," one of the farmers told ANI.

Arrangements have been made for the farmers at the ground, by the Delhi Government.

The Delhi Police made an appeal to the farmers to maintain peace and hold a peaceful protest.

"After discussion with farmer leaders, the protesting farmers have been permitted inside Delhi to hold a peaceful protest at Nirankari Ground, Burari. Delhi Police appeals to them to maintain peace," the Delhi Police tweeted through its official handle.

At Singhu on the border between Delhi and Haryana on the Grand Trunk Road a meeting of farmers from Punjab was held this morning. Security has been deployed at Tikri border as protesting farmers are gathered here despite being given permission to hold their demonstrations at the Nirankari Samagam Ground.

A Delhi Gurudwara Committe was seen starting langar at the Singhu border.

Farmers are protesting against the three laws -- the Farmers Produce Trade and Commerce (Promotion and Facilitation) Act, 2020, The Farmers (Empowerment and Protection) Agreement on Price Assurance and Farm Service Act, 2020, and The Essential Commodities (Amendment) Act, 2020.

They say that peaceful protest was a Constitutional right and the use of water cannons against them was a crime.

While the government said the three laws will do away with middlemen, enabling farmers to sell their produce in the commercial markets, protestors fear that this could lead to the government not buying produce at guaranteed prices, thereby disrupting their timely payments.

A group of farmers from Fatehgarh Sahib on their way to Delhi to protest against Centre's farm laws.

Appealing to farmers to end their protest in view of COVID-19 pandemic and winters, Union Agriculture Minister Narendra Singh Tomar had earlier said the central government is ready to discuss issues related to three agriculture sector laws with the representatives of farmers organisations.