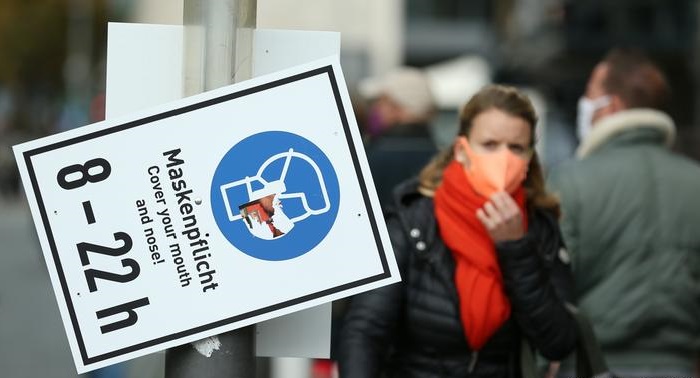 Officials at the Robert Koch Institute in Berlin said there had been 410 fatalities reported the previous day, beating mid-April's record of 315 deaths.

It means that at least 14,771 people have died from the disease in Germany since the outbreak of the pandemic.

The institute also reported that there had been 18,633 new infections on Tuesday, bringing the total to 961,320.

German Chancellor Angela Merkel will meet federal state leaders later Wednesday to discuss how to coordinate the country's coronavirus strategy for the rest of the year. The current shutdown is expected to be extended until December 20.

The public spending watchdog in Britain has said that the failure to stockpile key pieces of personal protective equipment before the pandemic left supplies low and forced the government to pay five times the normal price to meet demand.

France will start easing curbs this weekend so people will be able to spend the holiday with their families, after a speech by French President Emmanuel Macron late on Tuesday. Macron said a vaccine could start being administered by the year-end if approved by regulators.

In Spain, the local government in Madrid is also planning to ease restrictions on social bubbles ahead of the holiday season. It will allow family and social events to be attended by ten people, rather than the usual six. But the changes will only apply on key dates over the Christmas and New Year period.

Italy wants an EU-wide shutdown of ski slopes this winter in a bid to halt the spread of the virus. The call from Prime Minister Giuseppe Conte has drawn mixed reactions. Bavaria's premier Markus Söder backs the idea, but Austria's finance minister Gernot Blümel said, a ski shutdown would cost the nation around 2.4 billion euros (2.8 billion dollars) in lost revenues for the three-week Christmas vacation season.

"If the EU really wants [a shutdown] it has to pay for it," Bluemel said, arguing the EU would have to compensate 80% of these revenues, in line with the Austrian government's own COVID-19 aid scheme for shuttered businesses.

Fashion-conscious shoppers in Japan can now protect themselves against the coronavirus in luxurious style with opulent masks adorned with diamonds and pearls for a cool million yen ($9,600) each. The diamond masks are embellished with a 0.7 carat diamond and more than 300 pieces of Swarovski crystal, while the pearl masks contain some 330 Japanese Akoya pearls.

Bars and restaurants in Japan's capital of Tokyo will be asked to close early in a bid to halt coronavirus infections, the city's governor Yuriko Koike said on Wednesday. Businesses would be asked to close by 10 p.m. from Saturday until Dec. 17 and will be eligible for cash assistance from the government, Koike said, urging people to stay home as much as possible.