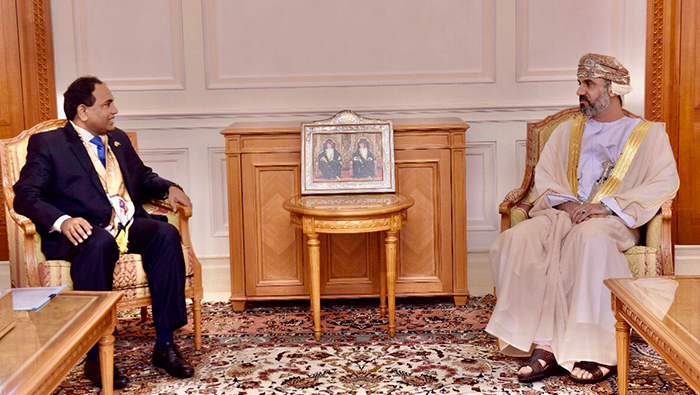 During his meeting, the ambassador also gave him a copy of a message of congratulations from Asad Qaiser, the Speaker of the National Assembly of Pakistan.

“He also discussed ways and means to enhance parliamentary cooperation between the two brotherly countries,” said the embassy in a statement. “Ambassador Wagan appreciated Oman’s role in containing the COVID-19 global pandemic and wished that the people of Oman overcome this pandemic.

“The ambassador also thanked His Majesty Sultan Haitham Bin Tarik for announcing measures for expats to leave the country without paying some of their pending fines, and for granting a Royal pardon to prisoners, among whom were Pakistani nationals.”

Pakistan’s embassy in Oman also organised a webinar on November 18 to pay tribute to the ties between the two countries.

“Muhammad Sadiq Sanjrani, Chairman of the Senate was the chief guest, and delivered a keynote speech,” added the statement. “He offered messages of felicitations to His Majesty.”

Other speakers included Dr Muhammad bin Said Al Mamri, Undersecretary of the Ministry of Awqaf and Religious Affairs, Dr Said Muhammad Al Saqlawi, member of the State Council of Oman, and Dr Iqrar Ahmad Khan, vice chancellor of the Agriculture University, Faisalabad. The event was hosted by the ambassador, who spoke at length about the ties that bind Oman and Pakistan.