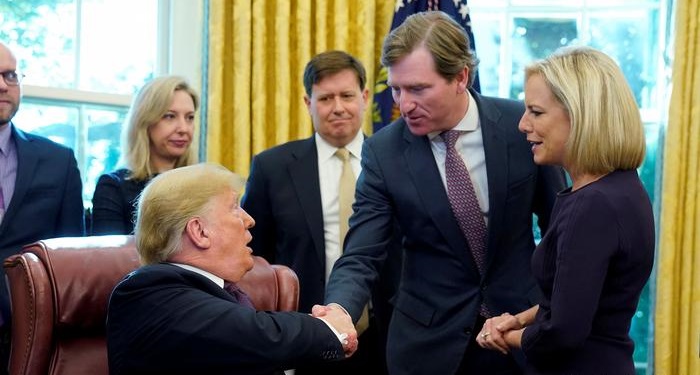 US President Donald Trump announced in a tweet on Tuesday that he had fired Chris Krebs, the director of the Cybersecurity and Infrastructure Security Agency (CISA).

CISA, which falls under the Department of Homeland Security, was established by the Trump administration in 2018 after accusations of Russian interference in the 2016 election.

In a series of tweets, Trump said that Krebs' recent statement defending the security of the recent election was "highly inaccurate."

Trump has so far refused to recognize the victory of Democratic President-elect Joe Biden and has repeatedly made unfounded claims of widespread fraud and glitches in voting machines.

CISA and state election officials released a statement last week that said there was "no evidence" of compromised ballots or voting machines, saying the 2020 election was one of the "most secure" in the country's history.

"Honored to serve. We did it right. Defend Today, Secure Tomorrow," he wrote. He was also prompt to change his bio description on Twitter to "1st Director @CISAgov (former)".

According to local media reports, Krebs reportedly found out about his dismissal from Trump's tweet. Mark Warner, the vice chairman of the Senate Select Committee on Intelligence, supported Krebs after the news of his dismissal.

"Chris Krebs is an extraordinary public servant and exactly the person Americans want protecting the security of our elections. It speaks volumes that the president chose to fire him simply for telling the truth", said Warner.

The CISA is tasked with securing voting and ballot counting machines from foreign and domestic interference.


Krebs also reportedly angered the White House over a CISA-run website called "Rumor Control" which debunked misinformation about the election.

In the past few days, he had regularly fact checked claims regarding the election, posted by Trump and his supporters — often using the red siren emoji. On the day of the election, Krebs had asked Americans to "treat all sensational and unverified claims with skepticism."

This is the second dismissal by Trump this month through Twitter. Last week, the president fired Defense Secretary Mark Esper the same way.