Over 700 mosques have been reopened in Oman 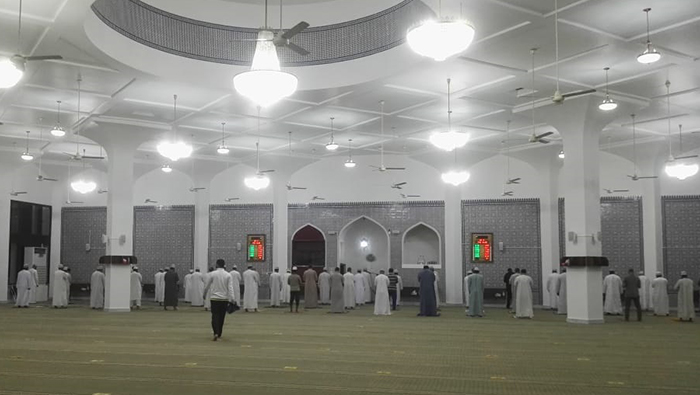 Muscat: More than 700 mosques in Oman, which had been temporarily closed during the pandemic, were reopened to worshippers, with certain rules in place.

Their reopening had been sanctioned by the Supreme Committee to deal with COVID-19, which has stipulated that only mosques that could accommodate 400 worshippers can reopen to the public.

“Registration is still open for more mosques to be allowed to reopen,” said Zahir Abdullah Al Hosani, the Director of the Mosques Department at the Ministry of Religious Affairs and Awqaf. “Mosque supervisors can get this done by filling the online form available to them.”

“Our department had to turn down a number of applications from mosques that requested reopening, because they did not meet the requirements for safe congregation,” he added.

Rules and regulations mosques are required to follow on reopening have been listed in MERA’s Directory of COVID-19 Guidelines, which were issued last week.

Omani citizens said they were happy to be able to go to places of worship once more, after they’d been previously shut to stop the spread of infection. Naif Al Sinani, from Wilayat Saham in North Batinah was among those who was happy to return there to pray.

“I went to the mosque in Saham to perform Fajr prayers,” he said. “I shed tears while praying, when I heard the voice of the imam, because I was able to come to the mosque after nearly eight months. I am very happy with the decision of the Supreme Committee to reopen mosques in the country. We have been waiting for this decision for a long time.

“Without coming to the mosque to pray, I do not feel the sweetness of prayer and worship that one is supposed to experience,” added Al Sinani. “Prayer is an obligation for all of us. Now that this has happened, I hope God gives us the strength to make this disease that has changed our lives disappear.”

Another of those who went to pray on Monday morning was Mohammed Al Badi, who lives in Sohar, the capital of North Batinah. He too attended the early morning Fajr prayer.

“I experienced a strong feeling of faith I had not witnessed for the last eight months,” he admitted. “It was a very beautiful experience that I felt in all parts of my body. My eyes were shedding tears, and I experienced euphoria because I was able to pray in the mosque after such a long time.”

“We performed prayers at distances of about two metres between each other,” he added. “All of us wore masks, and on coming to the mosque, I made sure to sterilise my hands and not shake hands with others there. It was good to see other members of my community come to pray. We were very happy that we were able to pray together.”