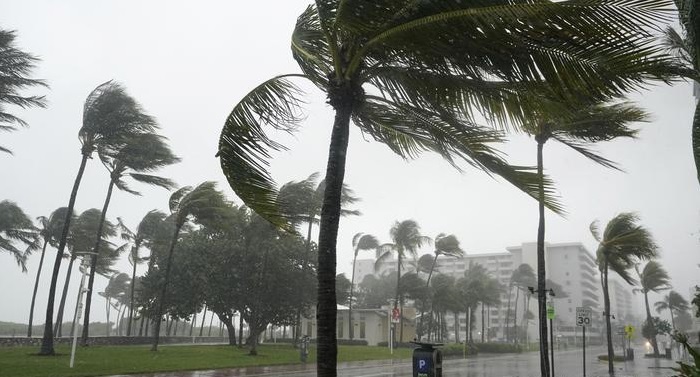 The heavy rains pose a grave danger to the US region which was already afflicted with heavy rains in the previous month. The slow moving storm, no longer classed as a hurricane, has already killed scores of people in Central America and the Caribbean.

Around 10 p.m. Sunday night (0400 GMT/UTC Monday morning) the eye of the storm was located roughly 37 miles (60 kilometers) east of Marathon, part of the Florida keys, an island chain off the southern tip of the peninsula.

The 65 mph (100 kph) winds were heading northwest towards the Florida mainland at around 14 mph (22kph). The Hurricane Center in Miami warned of torrential rainfall and possibly life-threatening flooding in parts of the state.

Forecasters fear that Eta could drop six to 12 inches (150 to 300 milimeters) of rain on an area that was already drenched by 14 inches (350 milimeters) last month. The consequences could be disastrous.

"In some areas, the water isn't pumping out as fast as it's coming in," said the Commissioner for Miami Dade, Jose "Pepe" Diaz. County Mayor Carlos Gimenez was in frequent contact with water authorities about the threat of being overwhelmed by the rain which has already caused problems for vehicles and roadways, even breaching some houses.

Fire services in Lauderhill responded to reports of a car driving into a canal. They were able to pull one person from the vehicle who was then taken to hospital in a critical condition, according to a statement by Lauderhill Fire give to AP.

Eta has a deadly track record

Eta's trajectory is forecast to move into the southeastern Gulf of Mexico as winds strengthen into a hurricane on late Monday or Tuesday.

Authorities mandated evacuations for mobile home parks, RV parks and campgrounds in the low lying Florida Keys. Several school districts were already closed as flooding made it too dangerous for students to attend.

Eta hit Central America as a Category 4 hurricane, devastating parts of Nicaragua, Panama and Mexico before moving on to Guatemala where it left at least 27 people dead. The storm, which weakened as was declassified as a hurricane, also hit Cuba where it caused substantial flooding although no deaths were recorded.