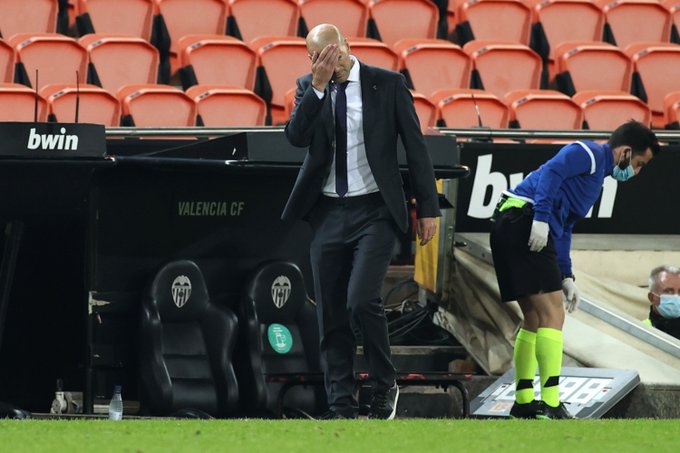 Scoring a hat-trick for the home side Valencia, Carlos Soler became the first player to score a hat-trick of penalties in a single La Liga game in the 21st century. Madrid started brightly and led through Karim Benzema's brilliant opener but conceded four goals in a league match for the first time since a 5-1 defeat to Barcelona in October 2018 - the result of which cost Julen Lopetegui his job.

Zidane said he is at fault and the side needs to solve their defensive problems.

"Three penalties, an own goal, it's too much. The fault is mine because I am the coach and I have to find the solution. I cannot justify what happened. It's a bad day, there are no excuses. We must improve defensively," Goal.com quoted Zidane as saying.

"I don't think Valencia have been tactically better than us. The only thing is that we started well and everything changed after the goal. This is difficult to understand. But yes, the maximum responsibility is mine. We must find solutions after the goal they scored," he added.

Madrid were without holding midfielder Casemiro who, like Eden Hazard, is isolating after testing positive for coronavirus.

The champions have won just one of the six La Liga fixtures in which Casemiro has not started since the start of last season, but Zidane insisted the Brazilian's absence was no excuse.

"We can look for a thousand things - you don't have to look for excuses. They are all Madrid players," he said.