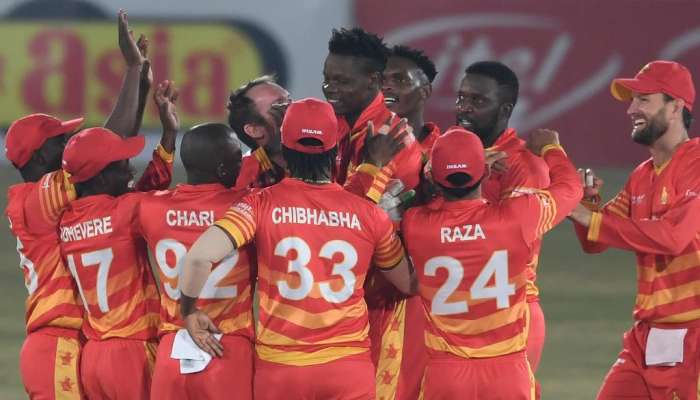 rawalpindi: Babar Azam’s 125-run innings went in vain as Zimbabwe defeated Pakistan in a Super Over in the third and final ODI here at the Rawalpindi Cricket Stadium on Tuesday.

With this win, Zimbabwe gained a consolation win in the third and final ODI. Pakistan won the series 2-1. In the Super Over, Pakistan managed to score just two runs. Zimbabwe chased down the target of three runs in just two balls.

Chasing 279, Pakistan got off to the worst start possible as the side lost its first three wickets with just 20 runs on the board. Imam-ul-Haq (4), Fakhar Zaman (2), and Haider Ali (13) all failed to impress with the bat in hand.

Mohammad Rizwan then joined skipper Babar Azam in the middle and the duo put on a brief 31-run stand, but as soon as the partnership started looking threatening, Donald Tiripano clean bowled Rizwan (10), reducing Pakistan to 51/4.

Babar Azam was firm at one end, and he kept the scoreboard moving, but Pakistan lost yet another wicket at the other end, as Iftikhar Ahmed (18) was sent back to the pavilion by Tiripano and the hosts were reduced to 88/5 in the 18th over.

Khushdil Shah and Azam retrieved the innings for Pakistan as the duo put on 63 runs for the sixth wicket, but as soon as the momentum started building for Pakistan, the hosts once again lost a wicket and this time it was of Khushdil (33), reducing the side to 151/6 in the 31st over.

Wahab Riaz then joined Azam in the middle and both batsmen ensured that Pakistan does not fall behind the asking run-rate. Both batsmen stitched together a partnership of 100 runs. With Pakistan just 28 runs away from the target, the side lost the wicket of Wahab Riaz (52) in the 47th over.

In the end, Zimbabwe managed to hold their nerve and emerge winners.

Earlier, Sean Williams played an unbeaten knock of 118 runs as Zimbabwe posted a total of 278/6 in the allotted 50 overs against Pakistan.

Opting to bat first, Zimbabwe got off to a bad start as the side lost its first three wickets with just 22 runs on the board. Brian Chari (9), Chamu Chibhabha (0), and Craig Ervine (1) all lost their wickets cheaply to Mohammad Hasnain.

Brendan Taylor and Sean Williams then got together at the crease and the duo retrieved the innings for Zimbabwe as both batsmen put together 84 runs for the fourth wicket. However, Pakistan came back strongly in the 26th over as Hasnain dismissed Taylor (56), reducing Zimbabwe to 106/4.

Wesley Madhevere then walked out to the crease and he gave ample support to Williams. Both batsmen stitched together a partnership of 81 runs, but as soon as Zimbabwe started gaining an upper hand, Hasnain once again dismissed Madhevere (33), reducing Zimbabwe to 181/5 in the 38th over.

In the final ten overs, Williams and Sikander Raza added 89 more runs to Zimbabwe’s total and as a result, the side posted a score of more than the 275-run mark. Williams remained unbeaten on 118 while Raza played a knock of 45 runs.