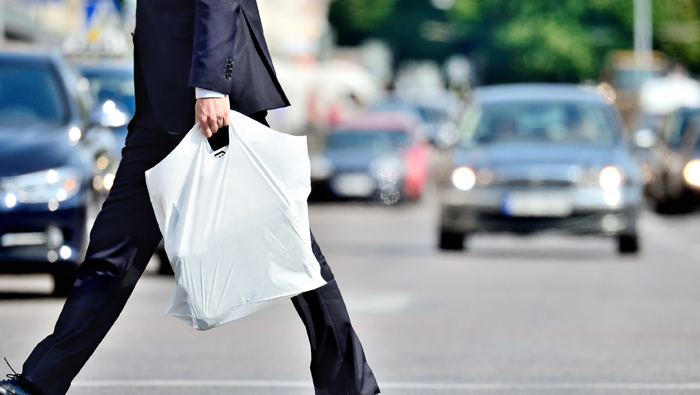 Muscat: An Environment Authority poll has revealed preparations for implementing the decision to ban the use of plastic shopping bags.

The authority is preparing to implement Ministerial Decision No. 23/2020 regarding the ban on the use of single-consumption plastic shopping bags, starting from January 1, 2021, as the decision was made that companies and institutions are prohibited from using single-consumption plastic shopping bags that are used once in order to preserve the Omani environment.

The decision also specified penalties in the event of a violation, whereby an administrative fine of not less than OMR 100 and not more than OMR 2,000 would be imposed on anyone who violates the provisions of the decision and doubled in the event of repeated violation, without prejudice to any more severe penalty stipulated in the Environmental Protection and Pollution Control Law.

Regarding the difference between single-use and multi-use bags, the single-use bags are mainly made of plastic, and they are of light thickness because they are used for one time only, and then they are disposed of in the waste, or they volatilize due to their lightweight in the environment, and this is a great challenge Because it takes about a thousand years to decompose, and this is due to the strength of plastic's resistance to natural factors that affect it.

As for multi-use bags, they are bags of several materials such as cloth, paper and other organic materials. They can also be made of plastic, provided they are used several times (up to 100 times) because of the thickness of multi-use bags measures from 40 to 60 microns.

The decision to ban the use of single-consumption plastic shopping bags was based on the Environmental Protection and Pollution Control Law promulgated by Royal Decree No. 114/2001 and the Royal Decree No. 18/2008 defining the terms of reference of the Ministry of Environment and Climate Affairs and adapting its organizational structure