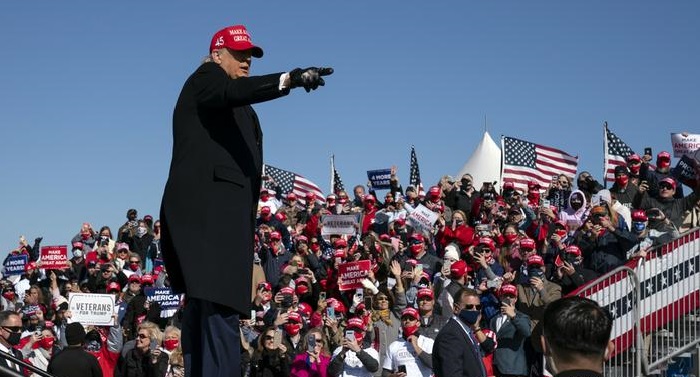 US President Donald Trump railed against the Supreme Court in the final hours of election campaigning late on Monday night.

Trump took to Twitter to vent his frustration at last week's decision to count mail-in votes in Pennsylvania that arrive up to three days after Tuesday's Election Day.

"The Supreme Court decision on voting in Pennsylvania is a VERY dangerous one," Trump tweeted. "It will allow rampant and unchecked cheating and will undermine our entire systems of laws. It will also induce violence in the streets. Something must be done!"

The Supreme Court ruling is seen as a setback by many Republicans, who are hoping for a lower turnout, with most mail votes expected to go the way of the Democrats.

Earlier on Monday, Trump had the same message for his supporters who attended a rally in Scranton, Pennsylvania. He said that state plans to count mail ballots that arrive up to three days after Election Day amounted to a "dangerous situation."

Trump has been critical of voting by mail, claiming, without evidence, that it will lead to electoral fraud.

Earlier on Monday a federal judge ruled that 127,000 ballots that were cast in Texas in a drive-thru voting system, created to maintain social distancing in the wake of the coronavirus pandemic, will be counted.

The judge rejected a lawsuit by several members of the Republican party who argued that the ballots were invalid.

Both Trump and his presidential rival Joe Biden were hitting the campaign trail hard in the final hours, focusing on some of the key swing states that look set to play a key role in who will get the keys to the Oval Office.

Like Trump, Biden was also in Pennsylvania, wooing supporters in the city of Pittsburgh. Biden had further support in the shape of pop star Lady Gaga, who performed on stage in front of the state's second most populous city.

Elsewhere former president Barack Obama was drumming up support in Miami for his former vice president. Only once since 1964 has the winner of Florida not gone on to become president.

In 1992, George Bush earned the most votes in Florida, only to lose out to Bill Clinton in the presidential race.