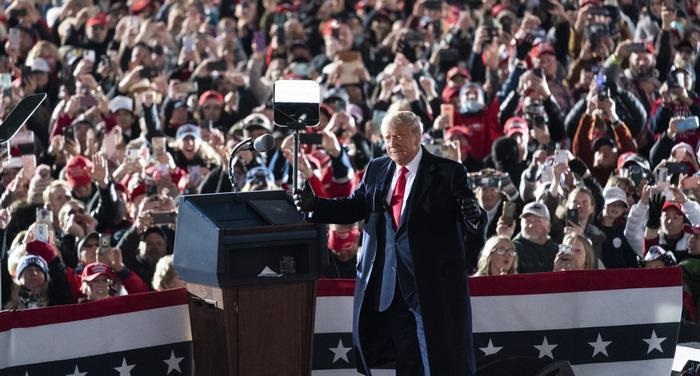 As many as 90 million Americans have already cast ballots in the US presidential election in a new record, according to data released on Saturday.

The high number of early voters means that, with only three days of campaigning left, the contest is poised to witness the largest turnout in at least a century.

Concerns about exposure to the coronavirus at busy election day voting sites on November 3 have led to a surge in people voting by mail or at early, in-person, polling stations — reflecting the high stakes and the impact of the pandemic.


President Donald Trump and his challenger, Joe Biden, were barnstorming through key states in the Midwest and Southeast on Saturday in a bid to mobilize the remaining undecided voters.

Trump — who has repeatedly claimed without evidence that mail-in ballots are susceptible to fraud — held four rallies in the swing state Pennsylvania.

He cautioned about "bedlam in our country" if no clear winner emerged on election night, adding without evidence that it could take weeks to sort out a result and "very bad things'' could happen in the meantime.

Trump also criticized Biden, saying the Democratic candidate would shut down the state's fossil-fuel industry, a major source of local jobs. He also mocked his opponent for criticizing the White House's response to the coronavirus pandemic.

"All he talks about is COVID, COVID. He's got nothing else to say. COVID, COVID," Trump said.

Meanwhile, Biden and his former boss Barack Obama made their first joint appearance of the campaign in two "drive-in" rallies in Michigan.

"I don't care how hard Donald Trump tries. There's nothing — let me say that again — there's nothing that he can do to stop the people of this nation from voting in overwhelming numbers and taking back this democracy," Biden said. "We're done with the chaos, the tweets, the anger, the failure, the refusal to take any responsibility."

Former President Obama called out Trump's pandemic response, saying that 140,000 American lives would have been saved if the president had taken an approach similar to Canada's. The virus has killed more than 220,000 people in the US, more than in any other country.

"This isn't a sporting event. This is life or death," Obama said. He added that Trump was set to be the first president in almost a century to preside over a net job loss.


Economists at Stanford University on Saturday released an estimate that President Trump's rallies held from June to September had led to more than 30,000 additional coronavirus infections and possibly as many as 700 deaths.

The study, however, has not been peer-reviewed and was based on a statistical model and not actual investigations of COVID-19 cases.

The Biden campaign was quick to jump on the findings, accusing the president of not caring "about the very lives of his strongest supporters."

The Trump campaign did not immediately respond to the findings.