Josh Hazlewood elated with his performance against England's top order 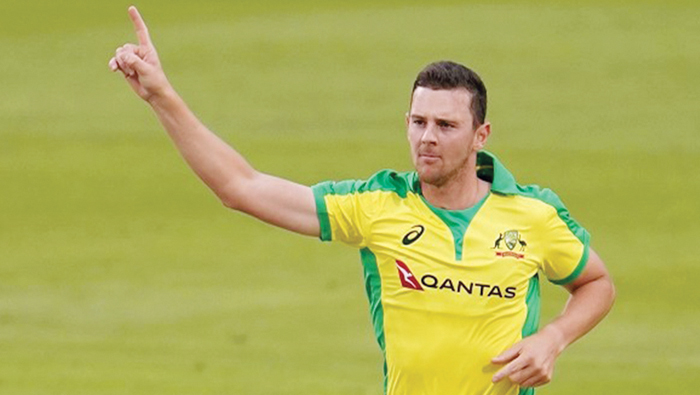 Melbourne: After guiding Australia to a 19-run win over England in the first ODI, pacer Josh Hazlewood exuded confidence and said he was very happy with his performance against England's top order.
Hazlewood took three wickets and gave away just 26 runs in the match. He dismantled England's top order dismissing Jason Roy and Joe Root for single-digit scores. "I think it's right up there for me. I've got a couple of five-fers in one-day cricket over the years but against this line-up, this top order, to bowl that well on this wicket, I was very happy with how they were coming out," cricket.com.au quoted Hazlewood as saying.
"England's top order has probably been the form top order of the last three or four years so it's a good measure of where you're at," he added.
Hazlewood was adjudged the player of the match for his spectacular bowling performance. The right-handed bowler credited accuracy and length for his scintillating spell with the new ball.
"The length I hit was really good, I didn't try to do too much at all - it was just about being accurate and the wicket was probably nipping around a little bit and doing enough," Hazlewood said.
"I looked at the way they bowled a little bit. It did a bit early on so we were expecting the new ball to not really swing much - it was quite windy - so it was just about hitting the wicket hard, getting a bit of variable (movement) up and down, as well as sideways," he added.
With this win, the visitors have gained a 1-0 lead in the three-match ODI series and have also registered their first points in ICC Men's Cricket World Cup Super League.
The two teams will next lock horns in the second ODI on Sunday, September 13 at the same venue.