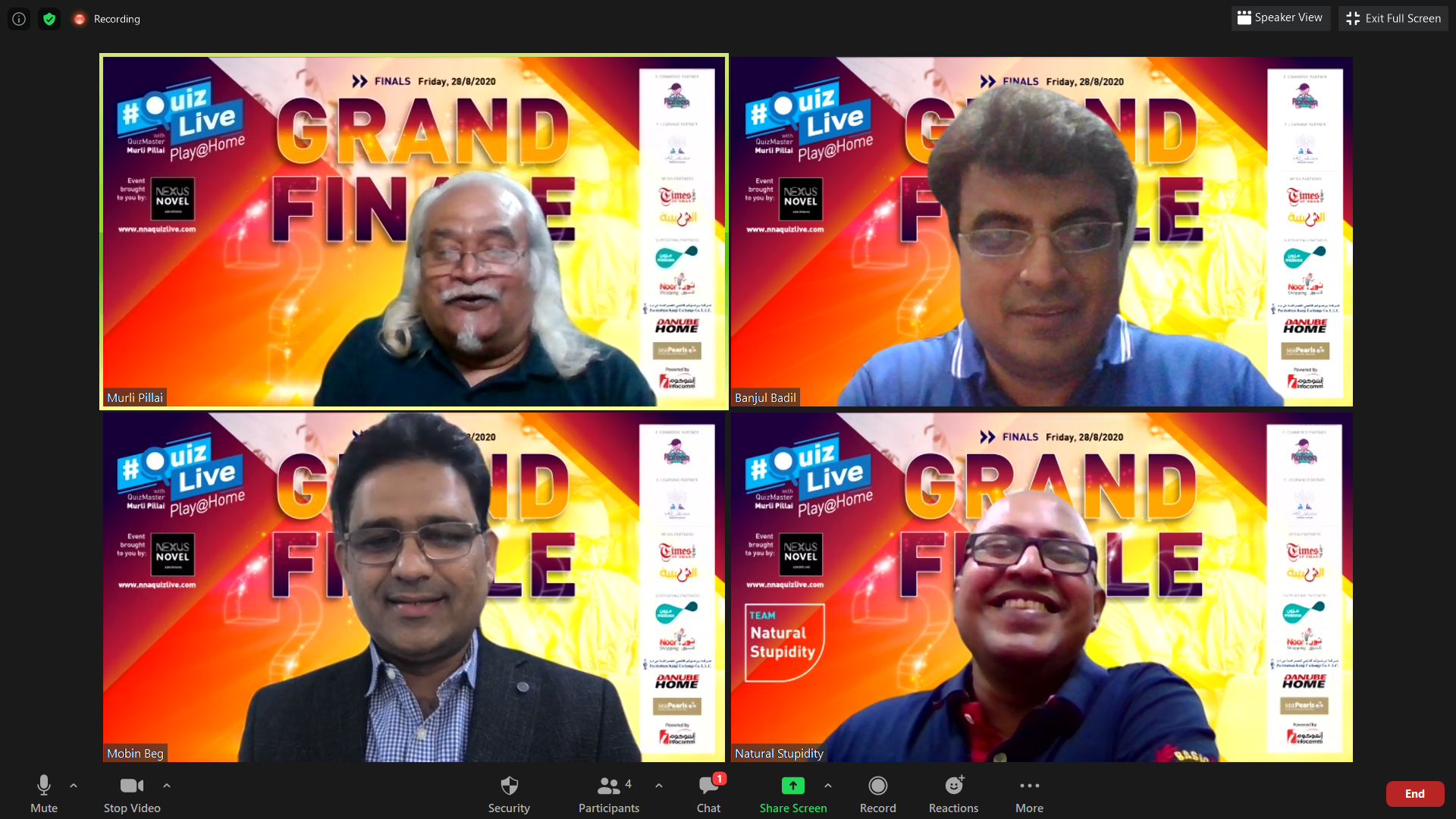 Muscat: It was an evening to remember. Natural Born Quizzers took it to Natural Stupidity right till the end but fell short by a mere 5 points, with Natural Stupidity emerging deserved champions in the inaugural online international quiz - #Quiz Live – Play @Home with Quiz master Murli Pillai organised by Oman’s leading creative, digital, branding & event management company, Nexus Novel Advertising and conducted by Oman’s own quiz master Murli Pillai, this was the first time that an online quiz on a video-conferencing platform was being introduced in Oman and at the same time open to teams from all over the world. A truly international event.
Split into three stages – The Prelims, The Semis and The Finals, the teams went through a written Prelims round from which the top 16 teams qualified for the semi finals – two sessions with 8 teams each. The semis were live and interactive and as the degree of difficulty kept mounting, the top four from each semi finals qualified for the Grand Finale on the 28th of August 2020.
Quiz master Murli Pillai of LetsGetQuizzical, did not just test the participants’ knowledge but also their cognitive and imaginative skills and most importantly the ability of the teams to react quickly under pressure. Speed was the key factor in the ultimate analysis.
And that’s where Team Natural Stupidity (Jaykanthan, playing solo) scored with natural ease. Natural Born Quizzers (father-son duo of Murali Ramaswamy & Abhishek Murali – ex Muscateers) were not far behind making a majestic comeback towards the end to fall short by just 5 points.
Bearly Koalified (young sibling duo of Skaria and Sebastian Parakal from Muscat) were consistent from the word go and were deserving 2nd Runner-up. Special mention goes out to the schoolboy team QuizWIz (Chetan Sethu & Lael Alva from Muscat) who held their own and surely queered the pitch for Natural Born Quizzers in the final round.
The event was viewed by enthusiastic audiences across the world as it was live-streamed on Facebook with lots of audience questions too. The audience was spellbound with the calibre of the quizzers and the interesting rounds set by quiz master Murli, covering a whole range of topics from Fiction to Events, from Faces to Brands, it was an all-encompassing quiz by all standards.
Mr. Mobin Beg, Business Head of Nexus Novel, in a concluding observation, congratulated the teams that had won the prizes and thanked all those who had participated in the event, and expressed his gratitude to the sponsors who had patronised the event that had turned out to be a great entertainer. He also promised to conduct more such quiz shows based on different themes like Technology, Sports, Entertainment etc.
Said Jaykanthan of Natural Stupidity, after his victory “It was really an exciting quiz in a completely innovative format. A great event and very well organised.” Murali Ramaswamy of Natural Born Quizzers, an old hand in Muscat quizzing added “It was so close, but no regrets. We had fun.”
Quiz master Murli Pillai summed it up at the end “The calibre was extremely high right from the Prelims. So many good teams missed out making it to the semis. The feedback from the audience watching was amazing too. And that gives us a lot of confidence going forward because my philosophy is different from conventional quizzing. The idea is to keep the questions short with a lot of visual multidisciplinary content and make the participants think beyond the obvious. That’s why the quiz was not only exciting and informative but a whole load of fun too for all involved.”
The victorious teams won handsome cash prizes plus generous shopping vouchers from Sea Pearl, Danube and Mazoon Dairy, for their superlative efforts.