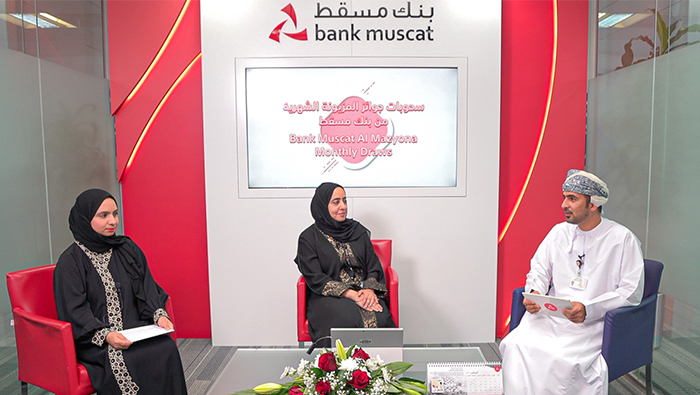 Muscat: Bank Muscat, the leading financial services provider in Oman, held its monthly draw for Asalah and Al Jawhar customers and holders of Zeinah, Shababi and Children’s accounts recently at the head office in Seeb in line with its commitment to encouraging a savings culture in Oman.
The event was held in the presence of senior bank officials and live-streamed for the benefit of customers and the general public via the bank’s official accounts on Instagram and Twitter.
The first part of the draw for July saw 35 lucky winners take home high-value prizes ranging from OMR 5,000 to OMR 25,000. Ten lucky Asalah Priority Banking customers won prizes of OMR 25,000 each while 25 lucky Al Jawhar customers won OMR 5,000 each at the draw. Prizes of OMR 500 each were won by 420 customers across all the governorates of the country and 15 Zeinah account holders won OMR 1,500 each. Fifty Shababi account holders won OMR 100 each while 40 Children’s account holders won OMR 100 each during the second part of the draw. Ten Children’s account holders also won OMR 100 each for the birthday prize draw. Bank Muscat also held the draws for salary transfer customers where 15 prizes were given to those with salaries above OMR 1,000 and another 15 prizes were given to customers drawing less than OMR 1,000 in monthly salaries. All the winners in the salary transfer draws will receive RO 500 each, every month for a year.
Abdullah Tamman Al Mashaani, Deputy General Manager –Institutional Sales and Product Development, congratulated the winners of the monthly prize draws and said: “Al Mazyona reaffirms Bank Muscat’s vision and constant efforts to fulfil the aspirations and ambitions of the largest banking family in Oman by rewarding winners with the highest prizes in Oman. This year’s Mazyona scheme offers over OMR 11 million in prize money and provides a great incentive to all people to make savings a regular habit to ensure their future financial security.” He stressed that all bank customers have the opportunity to win valuable and exciting prizes by making a regular habit of saving. He added that the bank would continue to popularise the savings scheme in the Sultanate by conducting it transparently and by promoting the draws across the bank’s website and social media accounts.
Abdullah Al Mashaani explained that the success of the Al Mazyona scheme comes from the bank’s keen interest in ensuring transparency and credibility during the draws. The draws are approved and audited by the internal audit department of the bank and by global audit firm Deloitte. He wished all customers the very best for upcoming draws of the Al Mazyona scheme including the special draws to be held later this year.
The 2020 Al Mazyona scheme offers the biggest prizes in Oman with a total of OMR 11 million to be won through the year during monthly draws and draws on special occasions including National Day, Women’s Day draw, Mid-year draw and the End-of-Year draw. Both the number of Al Mazyona prizes and the total prize money has been increased this year, with the total number of winners in the 2020 scheme going up by around 50 per cent to 6,677 winners.