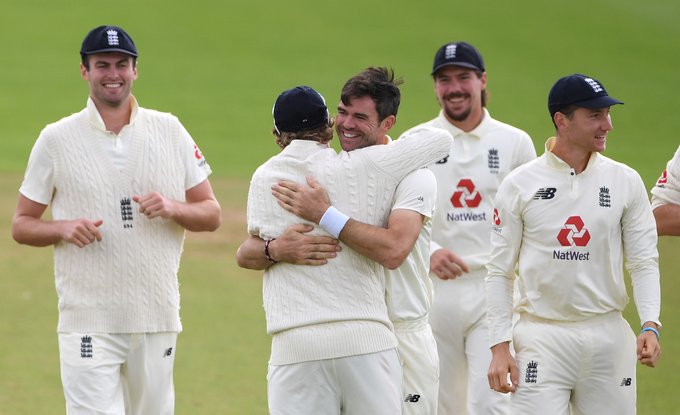 Southampton: England won the series 1-0 on the back of a close win in the first Test, with the last two matches ending in draws.
England continued their fine summer at home with a series win over Pakistan, their first over the visitors since 2011. Pakistan came in promising much but fell short when it mattered in the first Test and it ended up costing them the series after the last two Tests finished as rain-affected draws. Here are some key takeaways from the series for both teams:
James Anderson and Stuart Broad are far from done
With 13 and 11 wickets in the series respectively, Stuart Broad and James Anderson once again showed why they are a class apart despite concerns surrounding their age. While Anderson got to a record 600 Test wickets and casually accepted the suggestion that he may bag a 100 more, Broad took his career tally to 514 wickets as he ran through Pakistan's batsmen at an average of just 16.46 runs per wicket.
Both seamers played every match in the series and spoke passionately about continuing to don the whites for England in the future.
Azhar Ali shows his class
Azhar Ali had copped criticism for his slim returns since becoming the Test captain. Before this Test, Azhar had averaged 26.69 with the bat when captaining the side, making just one century and one half-century. His last fifty-plus score outside Asia had come against England in 2018 at Lord's. With pressure mounting on him, the Pakistan skipper produced a sensational knock in the final Test - an unbeaten 141 - yanking his side out from a rut at 30/4. Pakistan needed their skipper to shake away his lean run and he did so with style.
Pakistan's away woes continue
Pakistan's last win in an away Test came at Lord's against England in 2018. Since then, they lost seven Tests on the trot against Australia, South Africa and England before rain and bad light helped them eke out a draw in the second Test of this series. With rain hampering the third Test too, Pakistan held on for another draw but issues in their batting and bowling persisted.
While England recorded a series bowling average of 27.68, Pakistan returned a bowling average of 39.82. With the bat, England averaged close to 40 while Pakistan were stuck in the mid-20s. Their bowling attack, which was talked about a lot before the series, wasn't consistent enough to threaten England. Shaheen Shah Afridi, Mohammad Abbas and Naseem Shah averaged 51.60, 35.80 and 69.33 respectively in the series.
England's No.3 question may finally have a long-term answer
England had been struggling to identify a proper No.3 in their batting line-up. Before the final Test, when Zak Crawley made an exceptional 267, England had tried 14 batsmen at the No.3 position since 2015 with Joe Root, who mostly prefers to bat at No.4, occupying the slot the most. Crawley's natural aggression and confidence makes him a potent No.3 in the making. The double-century underlined his ability to translate potential into substantial returns.
The stellar wicket-keepers
Both England and Pakistan benefited from impressive performances by their wicket-keepers. While Jos Buttler fought back critics with two crucial knocks in the series (75 in the first Test and 152 in the third), Mohammad Rizwan was tidy behind the stumps and more than useful in front of them with scores of 9, 27, 72 and 53.
Buttler made 265 runs at an average of 88.33 while Rizwan made 161 runs at 40.25. Both players were named as Player of the Series for their teams – a testament to their key contributions.