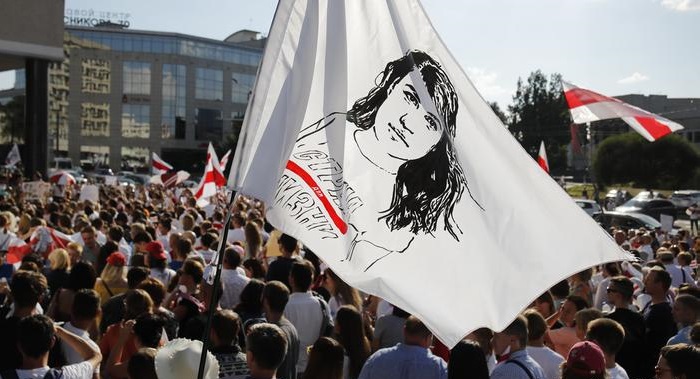 Belarusian opposition politician Sviatlana Tsikhanouskaya on Wednesday urged the European Union not to recognize the results of disputed presidential elections that have led to daily demonstrations in Belarus.

The appeal came as the leaders of the 27 EU member countries began an emergency summit to discuss the unrest and the possibility of tightening sanctions against the ex-Soviet state.

"I call on you not to recognize these fraudulent elections," Tsikhanouskaya, who is currently in exile in Lithuania, said in a video address.

Belarus has been rocked by mass protests since authoritarian President Alexander Lukashenko claimed a landslide victory in elections on August 9. The opposition accuses the 65-year-old of rigging the vote to secure a sixth term after 26 years in power. Protesters are calling for him to step down and for new elections to be held.

"The August 9 elections were neither fair, nor transparent. The results were falsified," Tsikhanouskaya said in her video message, which was delivered in English. "Lukashenko has lost all legitimacy in the eyes of our nation and the world."

As the EU summit got underway, Russian Foreign Minister Sergey Lavrov accused foreign powers of using the unrest to interfere in Belarus, according to Russia's news agencies. He said there was no need for outside mediation, and that statements from EU countries were driven by geopolitics.

France, Germany and EU Council President Charles Michel have appealed to Moscow, a close Belarus ally, to push for dialogue to resolve the crisis peacefully.

Michel tweeted that EU leaders had a clear message: "Violence has to stop and a peaceful and inclusive dialogue has to be launched."

In comments carried by Belarusian state news agency Belta, President Lukashenko said western countries should focus on their own problems instead of on what is happening in Belarus.

"I would want for them to first and foremost consider the protests against coronavirus isolation in Germany and other countries in Europe," he said.

"They have a lot of problems. They should not point to Belarus to divert attention from the problems that exist in France, the US, Germany and so on."

Sanctions on the agenda

At least two people have died and almost 7,000 others have been detained in the post-election crackdown on demonstrations. Last week, EU foreign ministers condemned the violence and agreed to prepare sanctions against implicated Belarusian officials.

They were expected to discuss the measures further during Wednesday's summit.

"It is clear that (the outcome of the Belarus presidential election) is not in line with the wish of the people, there has been unacceptable violence, and the rule of law is not respected. Sanctions have already been taken and will no doubt be reinforced this afternoon," EU Industry Commissioner Thierry Breton told Europe 1
radio.

The possibility of mediating talks between the Belarusian government and opposition was also likely to be on the agenda.

"The options for the EU are very limited," Judy Dempsey, from the foreign policy think tank Carnegie Europe, told DW. She said European leaders should push for free elections and the release of political prisoners, but added that such demands are difficult to implement, warning that hollow rhetoric could also be dangerous.

Dempsey said she hoped Tsikhanouskaya would soon return to Belarus to steer the protest movement and prevent it from radicalizing.

German Chancellor Angela Merkel and other EU leaders have stressed the need for a national dialogue to solve the crisis. The bloc has also said that the recent elections were neither free nor fair.

From exile, Tsikhanouskaya, 37, has urged protesters to continue taking to the streets. She argues that she is the rightful winner of the election and has pledged to organize new polls if Lukashenko steps down. In her video message to EU leaders, she said her allies have formed a council to "lead the process of peaceful transition of power via dialogue."