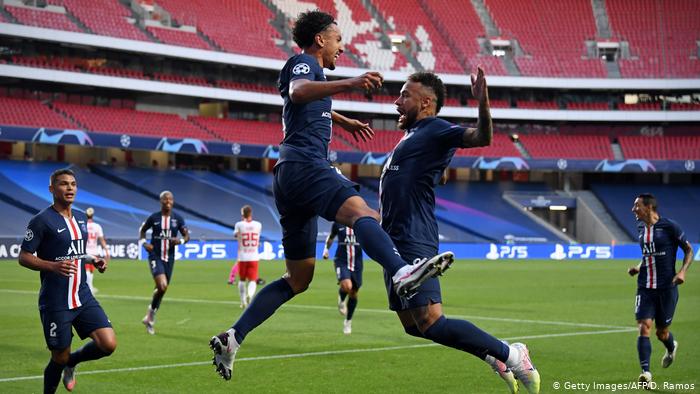 Lisbon: Goals from Marquinhos, Di Maria and Bernat send PSG into the Champions League final for the first time. Leipzig can reflect on a fine run to the final four but didn't turn up for this one. PSG will face either Bayern Munich or Lyon in Sunday's final.This wasn’t how Julian Nagelsmann had dreamt it.
When the dust settles on RB Leipzig’s Champions League campaign, they can reflect on a groundbreaking run to the final four that has seen them take great strides on the European stage — but the manner of this defeat will grate on Nagelsmann.
The Leipzig coach has still never beaten Thomas Tuchel, the man who encouraged him onto the path of coaching at Augsburg. In truth, this was a one-sided affair and Nagelsmann can only be left to reflect on the ease with which his side were cut open and the reality that PSG could have scored six or seven.
Werner factor
Timo Werner's departure for Chelsea proved not to be factor when Leipzig saw off Atletico Madrid in the quarter finals, but against a PSG side who like to defend further up the field, Leipzig sorely missed the man who had scored 28 goals and notched eight assists in 34 games this season.
Leipzig were ponderous where they're usually incisive and labored where they're usually dynamic. For this, Nagelsmann must also take his slice of responsibility, as his team never stood up to the challenge. Even had Werner still been wearing the red and white of Leipzig, it probably wouldn't have made a difference. Leipzig were outclassed in every department and, based on Nagelsmann's second half substitutions, his priority became avoiding a thrashing .
"In the end, PSG's ticket to the final is well deserved," Nagelsmann said. "We needed a goal to get back into the game but instead they got it. Our belief was gone and in the end it was a case of character, and we did better in the second half. That's football, sometimes it's hard."
He added: "It's not easy to reflect on our season now, but in one week I think it will be ok. We need to find a new power for the new season."
Di Maria inspires PSG
On the flip side, PSG were irresistable. Neymar, seemingly back to his effervescent best, hit the post each side of the opener from Marquinhos, who soared through the air to meet Angel di Maria's beautiful freekick. Di Maria was the shining light for PSG, orchestrating wave after wave of attack, with Leipzig caught in the headlights.
Di Maria himself got on the scoresheet with a composed finish from close range after a mistake by Leipzig goalkeeper Peter Gulacsi, and by half time the writing was on the wall. Leipzig improved after the break, but Juan Bernat scored the third to extinguish any lingering hopes Leipzig had of staging an unlikely turnaround.
By the time Leipzig were finally put out of their misery, the result had long been obvious. Qatar-backed PSG have finally broken the glass ceiling and reached the Champions League final, with Leipzig left to contemplate what could have been.