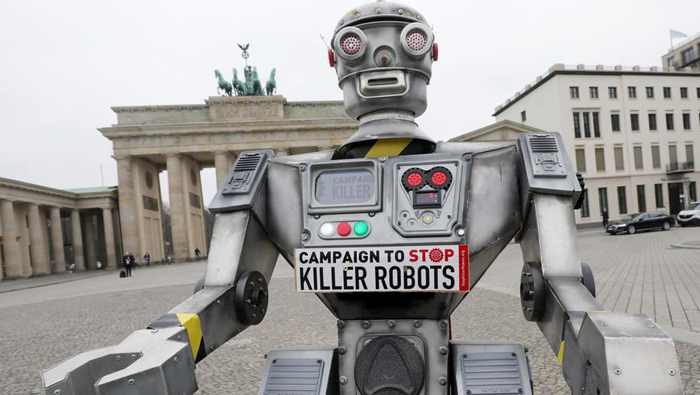 New York: Human Rights Watch has called on countries to negotiate on a new international treaty against the so-called "killer robots", adding that as many as 30 nations have shown a desire to explicitly ban fully autonomous weapons.
In a report released on Monday, the New-York based nongovernmental organization, reviewed the policies of 97 countries that have publicly discussed their views on fully autonomous weapons since the issue was first heard at the Human Rights Council in 2013.
The report titled, "Stopping Killer Robots: Country Positions on Banning Fully Autonomous Weapons and Retaining Human Control," says that a growing number of countries are now recognizing the need to save humanity from these "killer robots" that are also categorized as lethal autonomous weapons systems.
Since 2013, a coalition of HRW and more than 160 other NGOs has been at the helm of the 'Campaign to Stop Killer Robots', that seeks to pre-emptively ban fully autonomous weapons.
"Removing human control from the use of force is now widely regarded as a grave threat to humanity that, like climate change, deserves urgent multilateral action," Mary Wareham, coordinator of the Campaign to Stop Killer Robots and arms division advocacy director at Human Rights Watch, said in a statement published by HRW.
"An international ban treaty is the only effective way to deal with the serious challenges raised by fully autonomous weapons," Wareham said.
According to the report, the countries calling for the ban include: Algeria, Argentina, Austria, Bolivia, Brazil, Chile, China (use only), Colombia, Costa Rica, Cuba, Djibouti, Ecuador, El Salvador, Egypt, Ghana, Guatemala, the Holy See, Iraq, Jordan, Mexico, Morocco, Namibia, Nicaragua, Pakistan, Panama, Peru, the State of Palestine, Uganda, Venezuela, and Zimbabwe.
From 2014 to 2019, countries have participated in several meetings of the Convention on Certain Conventional Weapons (CCW).
However, HRW said that military giants such as Russia and the United States have blocked progress towards regulation while also investing majorly in the use of artificial intelligence for military purposes and developing land, sea and air-based autonomous weapons systems.
HRW's report was prepared ahead of this year's first CCW, which was slated for August 10 but has now been postponed due to the coronavirus pandemic.
Warhem said that many governments share the same concerns over permitting machines to take human life in wars and their desire for human control forms the base for a collective action.
"While the pandemic has delayed diplomacy, it shows the importance of being prepared and responding with urgency to existential threats to humanity, such as killer robots."