Stone tools dating back to 8,000 years unearthed in Oman and Yemen 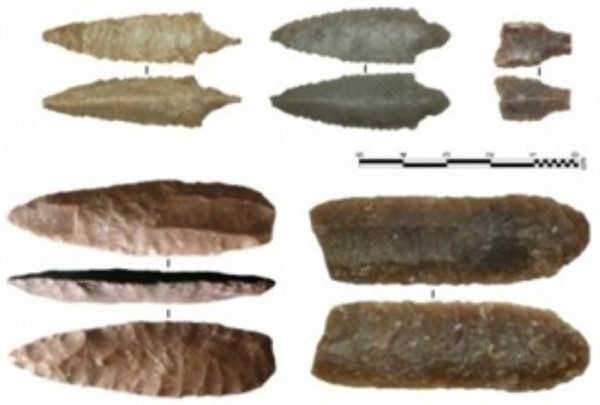 Ohio: Researchers from Ohio University, the French National Centre for Scientific Research and Max Planck Institute for Science of Human History are studying 8,000-year-old stone tools unearthed from archaeological areas in southern Oman and Yemen.
The unusual thing in this discovery is that the technique used in making the stone tools is that same found in North America, but the antiques in North America date back thousands of years earlier than the ones discovered in the Arabian Peninsula.
The outcome of the international study published by Ohio University in its website indicate that two separate sets of ancestors of human beings developed highly skilled inventions without communication among them.
The study affirmed that ancient people who lived in the south of the Arabian Peninsula eight thousand years ago invented stone weapons that were extremely sophisticated and that the weapons were designed in a manner that reflected the ancestors’ great skill in tool making.
The researchers who studied the pointed heads of spears and arrows made during the Neolithic era in Oman and Yemen discovered that ancestors of Arabs invented a technique of tool sharpening called grooving, which means sharpening the base of a stone tool by creating an internal hollow section within the tip of the tool.
This technique, they observed, was used for the first time by groups that inhabited North America thousands of years prior to their counterparts.
Joy McCorriston, senior researcher and professor of anthropology at Ohio State University, who is also an associate author of the current research and head of the American archaeological mission operating in Dhofar governorate, said that, though the technique of grooving is similar in North America and the Arabian Peninsula, a single difference remains: That in Arabia people used grooving also to exhibit their artistic skills.
McCorrison added that it was like a display of peacock feather that shows off unique command of the extremely sophisticated technology.
She pointed out that scientists studies pointed stone tools from Al Dahareez in Oman and Al Manaiza in Yemen.
Remy Crassard of the French National Centre for Scientific Research, the main author of the current research, said that the discovery of pointed tools outside North America was an important find as it refers to an important difference in the age and geographical location of the discovered sites as compared to similar sites discovered earlier.
Since no affinity links the ancestors of human beings, it indicates cultural similarity that denotes similar ways of life which prompted the groups to make the same tools without being aware that they existed sometime, somewhere before.