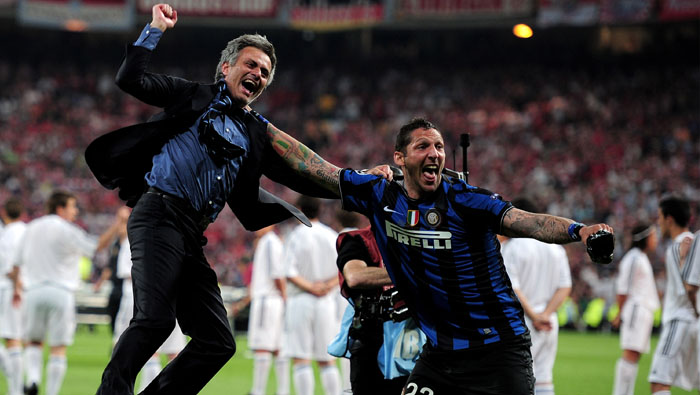 Berlin: Inter Milan secured their place in the UEFA Europa League semifinal after first-half goals from Nicolo Barella and Romelu Lukaku were enough to beat Bayer Leverkusen 2-1 while Manchester United progressed on Bruno Fernandes overtime winner against Copenhagen on Monday.
Both sides staged a lively opening period with chances at both ends but it was the Italians who opened the scoring in the 15th minute when Barella collected a loose ball inside the box to drill the ball with the outside of the boot into the far post corner.
Moments later Barella had the golden opportunity to double the advantage but the midfielder lacked in precision.
Lukaku cut a better figure in the 21st minute after screening the ball inside the area before slotting home for a 2-0 lead from very close range.
The Belgian international should have tripled the lead but he failed to overcome Leverkusen goalkeeper Lukas Hradecky following a one-on-one two minutes later.
Peter Bosz' men eventually showed signs of life with 24 minutes played as Kai Havertz reduced the arrears against the run of the game after beating Inter goalie Samir Handanovic.
Inter Milan thought they had won a penalty in the 26th minute but the video assistant referee revoked the hand ball decision.
After the restart, Milan started where they left off as Lukaku and Robert Gagliardini kept Hradecky busy whereas Leverkusen lacked ideas to overcome Inter's well-positioned defence.
Kerem Demirbay's long-range effort forced Handanovic into action but for all that Inter posed more of a threat as substitute Alexis Sanchez pulled wide from a promising position in the 66th minute.
However, Leverkusen had goalkeeper Hradecky to thank who saved his side from a bigger defeat after defusing Victor Moses in the closing period.
With the result, the Nerazzurri advance into the semifinal where they will clash with either Shakhta Donetsk or Basel in Dusseldorf, Germany on Monday.
Elsewhere, Manchester United booked their berth for the next round as well after a difficult outing against Copenhagen.
The Danes staged a disciplined performance over 120 minutes and gave the Red Devils a tough challenge.
Manchester United eventually killed the game early in the first half of the extra time when Bruno Fernandes clinically converted a penalty.
United will face either Wolverhampton or Sevilla in Cologne, Germany on Sunday.