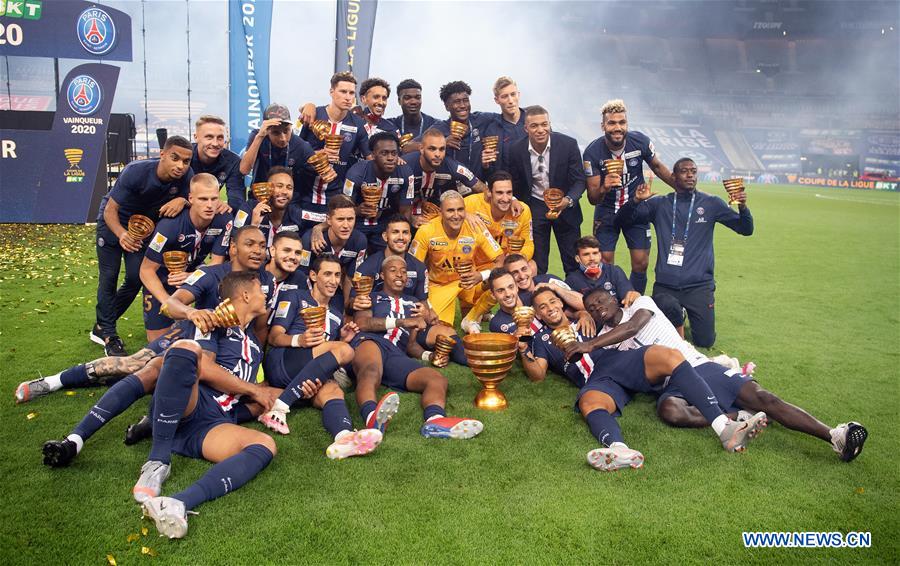 Paris: Paris Saint-Germain continued their dominance in domestic competitions as they beat Lyon 6-5 in a penalty shootout in the French League Cup final on Friday to secure their fourth domestic treble in six years.
It was the last edition of the tournament, which was founded in 1993 but will be abandoned since next season to "reduce the season schedule."
Under the hot temperature which reached 34 degrees celsius at the Stade de France, both sides produced little chance at the regular time and the game finished 0-0 at the end of extra time.
The winning point for the capital-based team came after the first 10 penalties were all scored, but Keylor Navas saved Bertrand Traore's shoot which gave Pablo Sarabia the opportunity to score for the victory.
The Spaniard made it - PSG seal their third title of the season, after the French Cup and Ligue 1. One week ago, PSG beat Saint-Etienne 1-0 in the French Cup final, which was the first competitive football match in the country after the professional leagues were called off in late April due to the COVID-19 pandemic.
"We suffered but it's beautiful to win at the end. We will celebrate this and then tomorrow we will start to think about another big match," Marco Verratti said in front of the camera after the match.
PSG now will eye on their Champions League quarterfinals against Serie A side Atalanta on August 12 in Lisbon, Portugal. Lyon, who next season will miss the continent competitions for the first time since 1996-1997, is still alive at this season's Champions League.
They will visit Turin to challenge Ronaldo and his Juventus next Friday in the last-16 return leg, holding a 1-0 leading from the first leg.