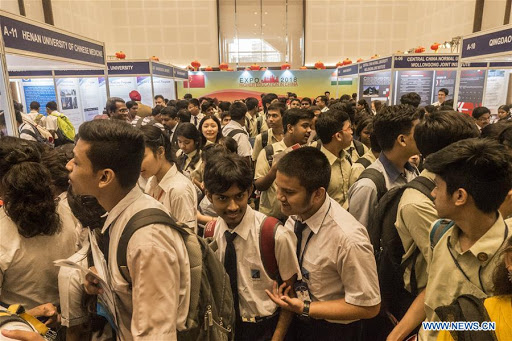 NEW DELHI: India has adopted the New Education Policy-2020 (NEP-2020) for both schools and colleges, which has evoked a mixed response from across the society, including the educationists, academicians, political class and cultural leaders.

The policy aims at increasing the annual budgetary allocation from 4.3 percent to 6 percent of the Gross Domestic Product (GDP).

The new education policy is seen in line with the traditional Indian culture as it lays focus on several aspects like regional languages, culture and traditions, that have been the key elements of the Rashtriya Swayamsevak Sangh (RSS), or National Volunteers Organization, which claims to be a socio-cultural organization.

On Friday English daily "The Times of India" quoted D. Ramakrishna Rao, the president of RSS' education wing -- "Vidya Bharti", as saying that the RSS had offered suggestions and the NEP was a comprehensive effort.

"It (NEP) is based on past experiences, present challenges, and future needs. The draft was finalised after six years of hard work which involved a wide range of consultation and responses from more than 100,000 villages," Rao reportedly said.

The Left parties, however, have slammed the NEP-2020 for its attempts to "centralise, communalise and commercialise" the education system, saying that while formulating the policy the Centre Government has strayed from the key idea of universalizing education and instead focused on creating education markets, reported the English daily.

Giving in to the demands of southern states, particularly Tamil Nadu, which have been alleging that there was always a pressure from the north India on imposing Hindi as the national language, the NEP-2020 ensures that no language will be imposed on anyone.

One of the provisions of the new policy says that teaching up to at least Grade-5 would be in mother tongue, or regional language, in different states across the country.

Federal Minister of Education Ramesh Pokhriyal said that all languages will be taught in an enjoyable style, with early reading and subsequently writing in the mother tongue. Skills will be developed for reading and writing in other languages in Grade-3 and beyond, according to the minister.

He added that the three-languages formula in the NEP-2020 encompasses two native languages along with English.

Critical of some aspects of the NEP-2020, an editorial in English daily "Hindustan Times" on Friday stated that though the policy talks of increasing public investment in education sector (from 4.3 percent to 6 percent), "there is no time-frame given".

It further said that only increasing investments will not be a panacea, to improve the overall quality of education. "There has to be realistic budgeting, flexibility in tweaking of priorities, and a strong leadership.

According to the editorial, many experts feel that while the NEP talks of social inequalities at length, its political and economic goals are "diffused". It further suggested that the Centre Government must take state governments onboard and allow a full-fledged discussion in the Parliament on the new policy.

Meanwhile, a section of experts and educationists opined that the NEP-2020 aims at expanding choice and empowers students. Meeta Sengupta, an educationist, wrote in an article that now onwards the students will have the freedom of exiting and re-entering in universities.

Besides, students will be able to choose any subjects, all subjects are equal, and the concept of streams (Medical, Non-Medical, Commerce, Humanities etc.) has been disbanded, added Meeta.

However, she further wrote in the article that the toughest criticism it will face is that it is "idealistic". "This gap between vision and tasking will need more than action plans and implementation strategy. The middle school goals seem wonderful but impractical," she added.