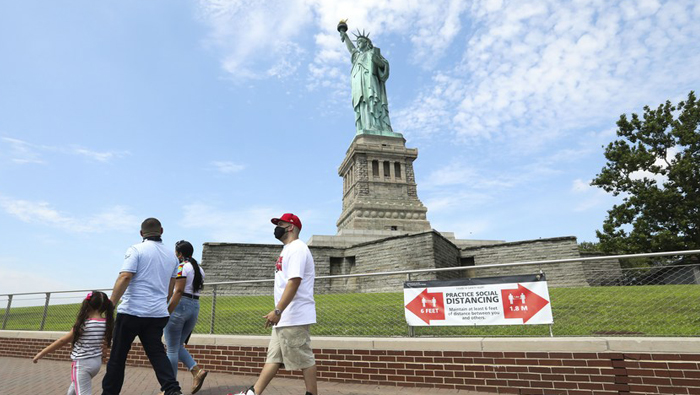 Washington: The US economy saw the sharpest contraction in decades between April and June as the country grappled with the fallout of COVID-19 lockdowns, indicating the depth and severity of the pandemic-induced recession.
The US economy contracted at an annual rate of 32.9 per cent in the second quarter, the US Commerce Department reported on Thursday. It was the deepest decline since the government began keeping records in 1947.
In the first quarter of 2020, real GDP contracted at an annual rate of 5 per cent.
"Parsing through the data reveals broad-based weakness in most of the spending components, which comes as little surprise given that the economy was more or less shut down from mid-March through mid-May," Jay H. Bryson, chief economist at Wells Fargo Securities, wrote in an analysis.
The decrease in real gross domestic product (GDP) reflected decreases in personal consumption expenditures (PCE), exports, private inventory investment, nonresidential fixed investment, residential fixed investment, and state and local government spending that were partly offset by an increase in federal government spending, according to the "advance" estimate released by the Commerce Department's Bureau of Economic Analysis.
The PCE plunged at an annual rate of 34.6 per cent in the second quarter, generating a 25-percentage-point drag on the GDP in the quarter. Nonresidential fixed investment, which reflects business spending, decreased by 27 per cent in the second quarter, subtracting 3.62 percentage points from GDP.
Bryson said the only area of growth was the 17.4-per cent rise in federal government spending, which largely reflects the administrative costs of the Paycheck Protection Programme (PPP) loans for small businesses that were extended during the quarter.
Jason Furman, professor at Harvard University and former economic adviser to President Barack Obama, noted that state and local government spending fell by an annual rate of 5.6 per cent in the second quarter, which, he said, was "not the largest contributor to the decline in GDP but perhaps the most unnecessary."
"This is hopefully the last negative quarter we'll see for GDP. This is hopefully the last negative quarter we'll see for consumption," Furman said on Twitter. "But absent swift and substantial action, the 5.6 per cent decline (annual rate) in state and local spending could just be the beginning."
Tough relief negotiations
Meanwhile, Republican and Democratic lawmakers are still far from reaching a deal on a new relief package, with direct aid to states and cities one of the sticking points in the negotiation.
Democrats proposed $1 trillion in aid for struggling state and local governments in their previously unveiled $3-trillion relief proposal, while Republicans planned to offer no new money.
The Senate Republicans' $1-trillion proposal, revealed on Monday, would slash the federal unemployment benefits from $600 to $200 through September, giving an unemployed worker about 70 per cent of previous wages when combined with state benefits, while Democrats want to maintain the current level of benefits through January.
As negotiations for the relief package stall, the Labor Department reported Thursday that the number of initial jobless claims in the United States rose to 1.43 million last week amid a resurgence in COVID-19 cases, following an increase in the previous week.
Noting that the extra 600 dollars unemployment benefits are set to expire Friday, Sarah House, senior economist at Wells Fargo Securities, wrote in an analysis that the "stakes are high" with more than 30 million workers collecting unemployment insurance.
Despite the current stalemate on relief package, Adam Posen, president of Washington-based think tank Peterson Institute for International Economics (PIIE), told Xinhua earlier this week that he remains "confident" that some relief bill will be agreed before Congress goes on August recess.
"I expect it will be in the $2 trillion size range, it will include some extension of unemployment and some aid to state and local governments. And it will do some good," Posen said.
Uncertain recovery
Over 20 states have already paused or partially reversed reopening efforts amid an alarming resurgence of COVID-19 cases, which, according to analysts, could undermine the nascent economic recovery.
The COVID-19 death toll across the country surpassed 150,000 on Wednesday, with Texas, Florida and California reporting record daily fatalities. As of Thursday, more than 4.4 million cases have been reported in the United States, accounting for about a quarter of the cases worldwide.
While monthly data show that the economy bounced starting in May, Bryson said recent weekly indicators suggest that the economy is "losing momentum" again as COVID-19 cases have spiked in recent weeks.
Monthly data suggest that GDP should bounce in the third quarter, but "uncertainties related to the pandemic continue to cloud the outlook later this year," Bryson said.
The US Federal Reserve on Wednesday also noted that the path of the economy will depend significantly on the course of the virus.
"The ongoing public health crisis will weigh heavily on economic activity, employment, and inflation in the near term, and poses considerable risks to the economic outlook over the medium term," the Fed said in a statement after concluding a two-day policy meeting.
The central bank kept its benchmark interest rate unchanged at the record-low level of near zero, and expects to maintain the rate "until it is confident that the economy has weathered recent events."
"Control of the disease is both necessary and sufficient to promote recovery of the economy," Posen told Xinhua. "Failures in public health will lead to de facto economic shutdowns, whether or not the local or federal governments issue the shutdown orders."
The PIIE president said people will only go back to spending and to work, to the degree they have choice, when they think the risk of them or their families dying is stabilised or rapidly falling.
"The difference between lockdown and not is in how fast you get control of the outbreak, not the economy," Posen said.