57% of people in Mumbai slums had coronavirus 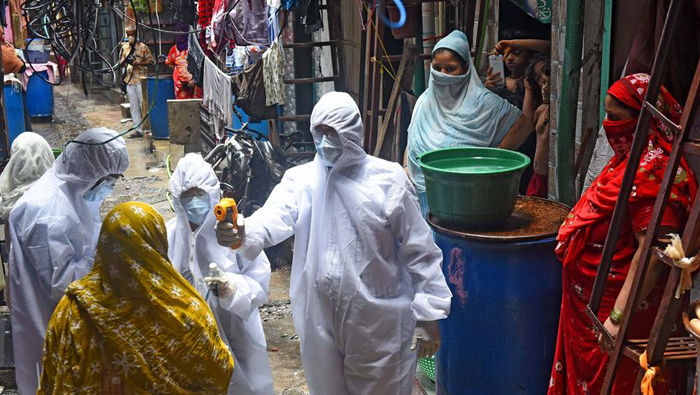 Mumbai: Over half of the people living in slums in the Indian city of Mumbai have contracted the novel coronavirus, according to a city-commissioned study, which raised researchers' hopes of achieving herd immunity.
Blood tests on nearly 7,000 randomly selected people showed that 57 per cent of slum residents had virus antibodies, according to the survey carried out on behalf of the Municipal Corporation of Greater Mumbai (BMC). This was compared with 16 per cent of non-slum inhabitants.
Densely populated Mumbai, with an estimated population of 12.5 million, has emerged as one of the epicenters of the coronavirus in India. Mumbai recorded more than 110,000 infected and 6,184 deaths, although cases appear to be slowing.
The report was released as Indian officials on Wednesday reported that infections nationwide had crossed 1.5 million and that the death toll neared 35,000.
"At least in the slums, we think it is largely because social distancing doesn't work simply because of the population density," commented The Tata Institute of Fundamental Research's Ullas S. Kolthur, who was involved in carrying out the survey.
Some experts in India have questioned whether the country is testing enough people and fear that many coronavirus deaths are not being recorded as such.
Signs of hope?
While the sample size for the study was low, the results gave researchers signs of hope.
Asymptomatic infections were "likely to be a high proportion of all infections" and indicated the virus death rate was likely "very low," said researchers.
The sero-survey — determining how many adults have developed antibodies without a confirmed history of infection — also showed herd immunity may be attainable, think researchers.
"The results are better than sero-reports from other countries," Indian English-language daily newspaper Times of India quoted top BMC health official Dr Daksha Shah as saying.