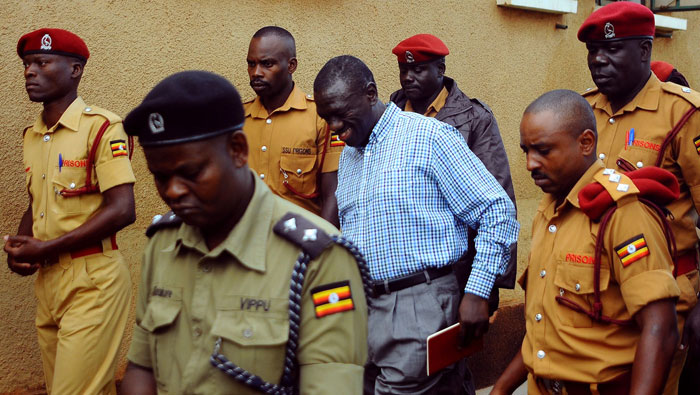 Kampala: Uganda's main opposition figure Kizza Besigye has been ordered detained until June 1 on charges of treason, a judicial official said, days after he was accused of unlawfully declaring himself president.
Besigye lost to veteran leader Yoweri Museveni in presidential elections in February, but said the vote had been rigged. He was detained last week, then charged on Friday with being sworn in as president in a mock ceremony, a charge sheet showed.
The conduct of the election and treatment of opponents has drawn criticism from Western donors, who also value Uganda as an ally in the fight against militants. Ugandan troops are part of an African force battling Al Shabaab in Somalia.
The opposition has staged sporadic protests since the vote, leading to clashes with police and dozens of arrests.
"He appeared (on Wednesday) and the treason charges were freshly read to him again. He was thereafter remanded," Solomon Muyita, spokesman for Uganda's judiciary, told Reuters.
He is expected to return to court on June 1, Muyita added.
Besigye, a perennial loser to Museveni, has been detained many times over the years. He was also charged with treason in 2005.
If found guilty, Besigye could face the death penalty, although Uganda has not carried out an execution in years.
His lawyer, Moses Byamugisha, and allies said Besigye appeared without legal representation and said he was taken to court ahead of schedule early in the morning before being swiftly returned to Luzira maximum security prison near Kampala.
A government spokesman denied any such tactic.
Museveni was named winner of the election with 60 per cent of the vote while Besigye came second with 35 per cent.
The government denied charges that the election was rigged. But European Union monitors said the poll was carried out in an intimidating atmosphere orchestrated by state actors.
The United States has voiced concern about the harassment of opposition figures.