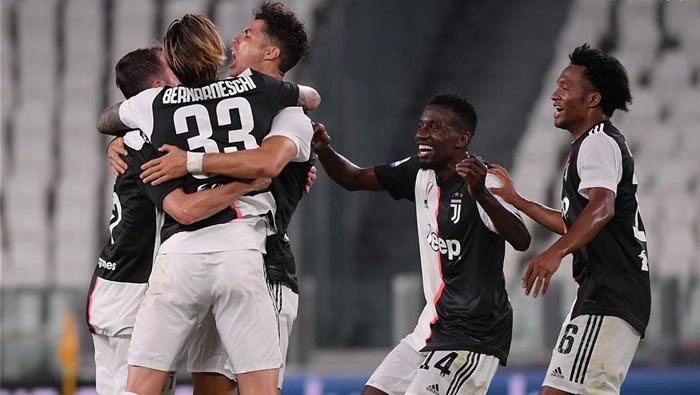 Rome: Juventus continued their dominance in the Serie A as they claimed their ninth consecutive Scudetto, an unprecedented record in the top five European football leagues as they enjoyed a 2-0 home triumph over Sampdoria on Sunday.
It's Maurizio Sarri's first Scudetto in his coaching career, while he became the oldest coach to win the title aged 61 years and six months.
The Bianconeri arrived at the Allianz Stadium with four points over second-placed Inter Milan, and they just needed one victory to seal the title with two rounds remaining.
The Old Lady were forced to make two changes in the first-half as Danilo and Paulo Dybala picked up injuries, making way for Federico Bernardeschi and Gonzalo Higuain.
The home side finally broke the deadlock deep into stoppage time before the break as Miralem Pjanic's free kick was taken short into the box for talisman Cristiano Ronaldo to drill home.
Juve doubled the lead in the 67th minute as Ronaldo cut inside from the left to unleash a missile, Emil Audero meekly beat it away for Bernardeschi to turn in from close range.
Sampdoria were dealt another blow as Morten Thorsby was sent off after collecting his second yellow card.
Ronaldo should have bagged a brace before the whistle, but his spot-kick was denied by the bar.
Elsewhere, Lazio claimed their second consecutive win after sweeping aside Hellas Verona 5-1, as Ciro Immobile completed a hat-trick, leading the scoring charts with 34 goals, three ahead of Ronaldo.
Roma extended their unbeaten run as they conquered Fiorentina 2-1, with Jordan Veretout scoring two penalties.