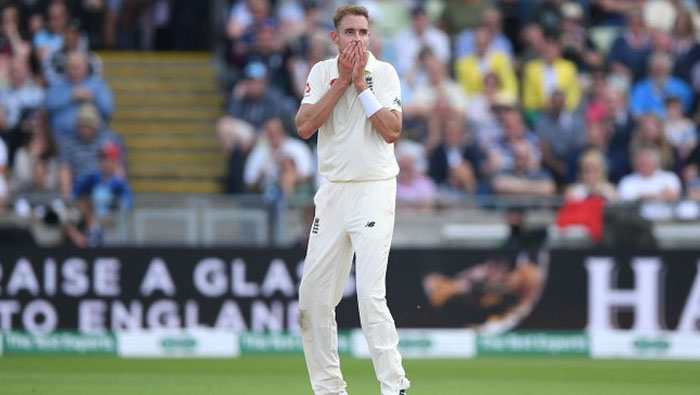 Manchester: Early wickets gave Windies strong hopes of bowling England out for under 300, but a blistering 62 from Stuart Broad boosted them to 369 before the hosts' seam attack caused problems for the visiting batsmen to leave the tourists 137/6 at stumps.
Ollie Pope, who resumed just nine runs short of a maiden home Test century, was dismissed without adding to his overnight score, bowled by Shannon Gabriel having been dropped at slip in the Trinidadian quick's previous over. Chris Woakes then fell in the next over, becoming Kemar Roach's 200th Test victim.
Another two wickets fell in the next two overs, with Jos Buttler and Jofra Archer both edging to slip to leave England 280/8 with Dom Bess and Stuart Broad at the crease and only James Anderson to come.
The bowlers made heavy use of the short ball to Broad, but the England seamer was happy to take it on and scored freely. A back of a length ball from Roach pulled assuredly over the rope at deep mid-wicket was just one highlight in an innings overflowing with extravagance and freedom. Roston Chase finally ended Broad's fun as he holed out off a low full toss for 62 from only 45 balls.
Bess and Anderson added a further 13 before the latter edged Jason Holder to slip to end the innings for 369.
Broad was quickly into the action with the ball too, striking within his first over to send Kraigg Brathwaite back to the pavilion for 1.
John Campbell and Shai Hope made England wait for their next wicket as they added 43 runs in 15.2 overs, but Archer set up Campbell with some full bowling before producing a surprise bouncer to give Rory Burns a simple catch at gully.
Hope continued to grind away, but struggled to find scoring options and was eventually dismissed by Anderson just before tea, feathering behind from a superb piece of swing bowling. Anderson struck again immediately after the break, taking the inside edge of Shamarh Brooks' bat to give Buttler another catch.
Roston Chase and Jermaine Blackwood threatened to form a partnership, but Broad trapped the former in front of the stumps for 9 to leave West Indies five down and still 97 runs short of saving the follow-on – a mark which could prove vital with wet weather forecast in the coming days.
Blackwood showed glimpses of the attacking instinct that was on show during his 95 in the first Test as he looked to counter-attack, but on 26 his middle stump was uprooted by Woakes, leaving the tail with the job of carrying the visitors past the follow-on.
Shane Dowrich somehow weathered a late barrage of short stuff from Archer and Woakes as he and Holder managed to hold on until play was ended by bad light with Windies 137/6, needing 33 more runs to avoid the follow-on.