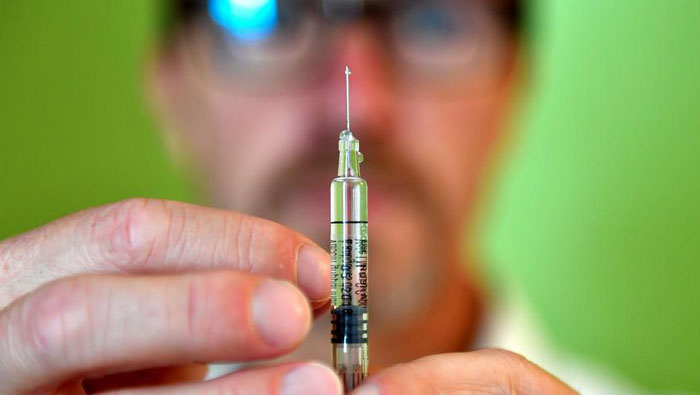 London: Oxford University's progress towards a vaccine for the novel coronavirus has raised hopes that there could be a product on the market by the end of the year. The UK government has already pre-ordered 100 million doses of the vaccine.
The team at Oxford published the results from early-stage, human clinical trials in the British medical journal The Lancet. They say their vaccine triggered an immune response, producing effective antibodies to fight the virus. Those antibodies were detected for 56 days, after which the trials so far ended.
With such a short trial period, it's unclear whether or not the antibodies produced by the candidate vaccine last longer than 56 days, or indeed whether the vaccine will provide any form of long-term protection.
Carsten Watzl, a professor of immunology and scientific director at a Leibniz Research Center in Germany, says "there's no data about that yet. They measured the antibodies for 56 days. But the question remains: How long do these antibodies last?"
Recent studies in China and Germany have indicated that the number of antibodies generated from a natural infection with the novel coronavirus drop within two to three months after patients recover.
A vaccine would have to provide much longer protection than that, not least because it would be logistically difficult and expensive to vaccinate whole populations several times per year.
The science behind Oxford's vaccine
The Oxford vaccine uses so-called "Adenovirus-vector technology."
Adenovirus causes a common cold in chimpanzees — but, don't worry, we wouldn't be infected with a chimp disease if we got the vaccine. The adenovirus is simply used a vector, a carrier or a vehicle, by which the vaccine is delivered into human cells.
The adenovirus has been genetically modified for the vaccine to prevent it from growing in human cells.
It's also been modified to carry a bit of SARS-CoV-2, the virus that causes the disease, COVID-19. And that bit of SARS-CoV-2 has in turn been modified to remove all its infectious elements. Its job is to let the body think it's under attack and, as a result, have the body trigger an immune response.
The SARS-CoV-2 virus has a protein on its surface called the S-spike. The scientists at Oxford have added genetic material, which "codes" for the S-spike, to their modified adenovirus.
As the vaccine enters the body, the immune system recognizes that S-spike as an invader, and uses it to generate antibodies, and — the hope is — immunity against future infections.
Why use a different virus as a carrier?
The main reason for using the adenovirus is speed. It takes a long time to produce viruses, then weaken or kill them for use in vaccines, or modify them as carriers or vectors.
But the Oxford team had the adenovirus vector in stock, as it were. They had been working on the technique — for use in vaccines — for years.
All they had to do was modify it to suit SARS-CoV-2 and add that S-spike to trigger the desired immune response.
"There is a downside, though, and that is that the approach has never been used in a licensed vaccine," says Watzl. "They've moved very fast, and are now going to Phase III trials [the final stage in clinical trials], but the process to license such a vaccine could be a little slower."
Antibodies and cellular immunity
Antibodies are proteins that are produced in response to an infection, or in response to a vaccine that aims to protect against an infection. They are produced by B cells, a type of immune cell. And B cells form memory cells, which, as the name suggests, recognize antigens — the things that infect us and trigger immune responses — if ever those antigens attempt to reenter the body.
In addition to antibodies, there is another line of defense called cellular immunity. That's where "T cells" come into play. T cells attack and destroy infected cells. In fact, it's almost a last line of defense, because once those infected cells have been taken over by a virus, there is little chance of ever bringing them back. So, the body has to get rid of them completely.
Loss of long-term immunity in COVID-19 patients
An effective vaccine should induce a B cell and T cell response. Both immune responses are important, says Watzl, and each has its functions.
Recent studies have suggested that COVID-19 patients lose antibodies, and long-term immunity, within two to three months after recovery. That's common in some other human coronaviruses, which cause a common cold, says Watzl, and "it could be that a similar thing is happening with the novel coronavirus."
Other infections result in longer-lasting B cell immunity. But the fact is that once a virus infects a cell, those antibodies can't reach it. So, it's down to the T cells to attack and kill the infected cells to get rid of the virus. It's the only way.
"But we also don't know how long the T cells last, and T cell immunity also depends on memory cells," says Watzl.
So, while Watzl says he is hopeful about the Oxford vaccine, those open questions remain the same: "If they vaccinate more people and expose them to the virus, will those people really be protected? And how long will that protection last?"
The Oxford team says their vaccine is safe. It caused only mild to moderate side effects, such as fever, fatigue and headache in trials so far. The World Health Organization lists it as one of over 130 candidate vaccines in clinical or pre-clinical trials. And those trials are ongoing.